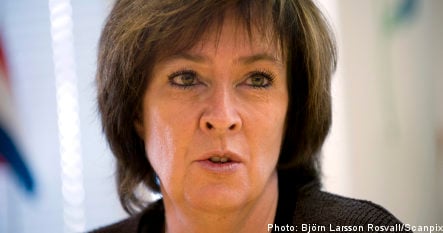 “I think that it’s wrong to close the door on the Left Party. I don’t think is something they should do,” said Wanja Lundby-Wedin, head of the Swedish Trade Union Confederation (LO) to the TT news agency on the margins of a meeting in Brussels.

“I don’t think they should rule them out. I think the Left Party ought to be an option in a future governing coalition. But that puts demands on the Left Party, of course,” she said.

Nevertheless, Lundby-Wedin admitted that she agreed with Sahlin’s assessment that the Left Party is currently unwilling to accept the current economic policy framework and that doing so would be a prerequisite for consideration as a credible governing party.

“That can’t be something that is up for negotiation. It’s too shaky. I completely agree with the judgment that Mona Sahlin has made,” she said, adding that she didn’t think the door was permanently closed to the Left Party.

“How strong that no is, how hard that door slammed – I think we’ll have to wait and see,” Lundby-Wedin said.

The decision by the Green Party and the Social Democrats to deepen their cooperation prompted a sharp reaction for Left Party leader Lars Ohly.

“We’re not a doormat,” he said on Wednesday following the announcment, who saw the move as a strategic mistake by the other centre-left parties.

“The only way for the Social Democrats and the Green Party to form a government is if the two parties can achieve a majority on their own.”

Sahlin said the decision to move forward without the Left Party was a result of the latter’s reluctance to make compromise on key economic issues, despite giving Ohly and his colleagues plenty of time to consider doing so.

But the decision sparked a flurry of internal criticism in a addition to the concerns voiced by some of Sweden’s most important labour groups.

“The cooperation really worries me,” he said in a statement, refering to what he sees as the Green Party’s centre-right leanings and a less than overly friendly attitude toward unions.

“In addition, I wonder what Mona Sahlin is doing when she time and again just steamrolls people within the workers movement. It’s not good for labour-political cooperation.”

Five chapters of the Social Democratic youth organization, SSU, attacked the Green Party in a common statement saying that plans for a coalition were hatched without sufficient discussion among Social Democratic party members.

And while Ylva Thörn, head of the Swedish Municipal Workers’ Union (Kommunal) is happy to see a stronger working relationship between the parties currently in political opposition, she was nevertheless surprised by the decision to leave out the Left.

“It’s too early to be closing any doors,” she said.

While she agreed that cooperating with the Left Party isn’t possible under current circumstances, Thörn feared that the move signaled that the Social Democrats were becoming overly focused on middle-income voters.

“The typical working class feels left out. People with low wages and women need to feel that a better alterntive for them exists,” she said.

And in an artcile published on Thursday in the Dagens Nyheter newspaper, the head of two major union groups, the Union of Service and Communication Employees (SEKO) and the Commercial Employees´ Union (Handels), said it was time for the Social Democrats to move to the left.

But Handels chair Janne Rudén who co-authored the article, said on Thursday he didn’t interpret Sahlin’s actions as a permanent move away from the Left Party.

“I would have rather seen a somewhat more mild rebuke of the Left Party,” he said.