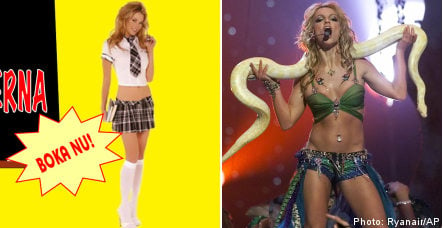 In defending the advertisement, Ryanair questioned whether the ERK accurately reflected the views of most Swedes.

“We are sure that the anti-funsters at the ERK do not speak for the majority of the famously liberal and easy going Swedes,” the company said in a statement.

“The ad simply reflects the way a lot of young girls like to dress. We hope the old farts at the ERK loosen up a little.”

The statement proclaimed further that “Ryanair defends the right of Swedish girls to take their clothes off.”

The ad in question features a scantily clad schoolgirl to promote a fare sale meant to coincide with the start of the school year.

According to ERK, the woman in the ad “is used to catch the eye in a sexual manner that is offensive to women in general”.

“This is the Britney Spears generation,” he told The Local.

“Young women around Europe want to look their best.”

McNamara explained that Ryanair received no complaints from campaigns run in the UK and Ireland which used the same image.

He also didn’t rule out the possibility that Ryanair would re-launch the campaign “because it has generated so much interest”.

RYANAIR
Ryanair to start flying from Arlanda this autumn
Url copied to clipboard!