The financial crisis and economic issues dominated the debate between the four centre-right Alliance party leaders and Mona Sahlin of the Social Democrats, Maria Wetterstrand of the Green Party, and Left Party leader Lars Ohly.

With two years left until Sweden’s next parliamentary election, the debate was the first of several planned debates and media appearances scheduled for the week ahead.

At the same time, 72 percent of respondents to the Synovate poll thought the government should cooperate across party lines in order to counteract financial concerns.

So far, the government hasn’t indicated any plans for reaching out to the Social Democrats to help tackle the financial crisis.

Sahlin came off a tough week which included a humbling about-face after an announcement to exclude the Left Party from future discussions.

The announcement was met with a chorus of criticism both from within and outside of the party, and Sahlin wasn’t able to dodge the issue on Sunday night.

Ohly called last week’s episode irresponsible, but added that he hoped for continued cooperation with the other two opposition parties.

“I fully understand that the Social Democrats and the Green Party need to discuss their policies. But I’m here as a responsible opposition party,” said Ohly.

And Green Party spokesperson Maria Wetterstrand’s refusal to directly answer whether her party was interested in governing with the Left Party prompted a pointed response from the Prime Minister.

“Whoever understood something can call a friend,” he said.

Nevertheless, Sahlin did her best to assure the governing parties and the viewing public that there will be a credible alternative to the Alliance at the next election.

“I’m trying to create a strong coalition government to replace these four [parties]. We and the Green Party have already begun cooperating and continue to talk with the Left Party,” she said.

And when it came to the issue of unemployment, the three opposition parties did their best to present a united front.

“I agree with Lars Ohly,” said Sahlin as part of an effort by the three opposition parties to argue that the government had added to people’s worries about the struggling economy through raising unemployment insurance fund premiums and lowering payouts.

The Alliance party leaders responded by arguing that the opposition’s plans to raise taxes on companies and wage earners would lead to the loss of thousands of jobs.

They then tried to steer the conversation away from a defence of past reforms and instead draw attention to the Alliance’s job creation efforts.

“We’ve changed what we had before to a policy which makes it profitable to work. That applies both in good and in bad times,” said Reinfeldt.

“You’re tricking the voters into believing that a-kassa is the only security,” she said.

There were also differences in approach to dealing with the wave of downsizings which has swept across Sweden in recent weeks.

While Sahlin advocated for targeted support to those who have recently lost their jobs, such as job retraining and increased employment insurance, Olofsson stressed the importance of changing Sweden’s business climate to create more jobs.

“But what help is it to those losing their jobs at Volvo that those who remain end up with lower taxes,” countered Sahlin.

While agreeing that the current economic situation was serious, the Alliance parties maintained that it wasn’t enough to justify raising unemployment insurance payments.

“We’re going to use our resources to that people can work,” said Christian Democratic leader Göran Hägglund. 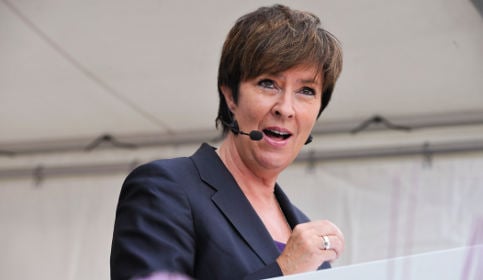