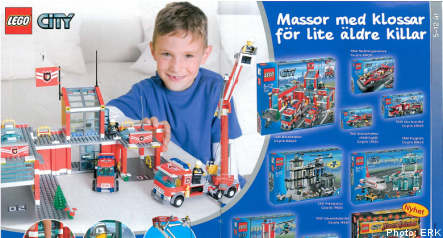 Sweden’s Trade Ethical Council against Sexism in Advertising (ERK) singled out images in a recent Lego catalogue which featured a little girl playing in a pink room with ponies, a princess, and a palace accompanied by a caption reading, “Everything a princess could wish for…”

On the opposite side of the page, a little boy can be seen in a blue room playing with a fire station, fire trucks, a police station, and an airplane. The caption beneath reads, “Tons of blocks for slightly older boys.”

In its findings, the ERK singled out the images for preserving traditional and anachronistic views on gender roles, according to the Göteborgs-Posten newspaper.

Furthermore, said ERK, the pictures constituted a form of stereotyping which was degrading to both men and women.

Lego defended the images in question by pointing out they were included in a catalogue which also contained several pictures of boys and girls playing together.

The company said it didn’t believe the catalogue would be viewed as promoting stereotypes, insulting, or discriminatory.

The ERK backed its ruling by referring to the International Chamber of Commerce (ICC), which says that advertising should be not be discriminatory when it comes to issues of gender.