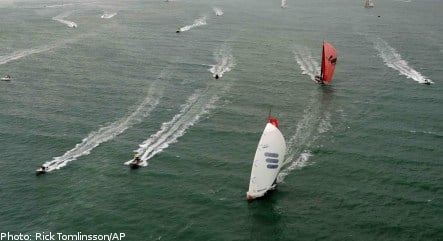 Dutch Team Delta Lloyd, skippered by the Irishman Ger O’Rourke lay in fourth, Team Russia were in fifth and Irish-Chinese team Green Dragon, skippered by England’s Ian Walker, were 118 miles off the pace in sixth.

Spain’s two Telefonica yachts were trailing in seventh and eighth position, more than 200 nautical miles behind the leaders, on the seventh day of the race that started in the Spanish Mediterranean port of Alicante.

“There are minefields everywhere and there is nothing traditional’ about this leg so far at all,” said Puma skipper Ken Read.

The boats are expected in Cape Town, South Africa on November 3 at the end

of the first of the 10 legs of the race.

After 37,000 nautical miles, the finish line is in St Petersburg, Russia, where the teams are expected in June 2009.

Each of the yachts receive points according to their position in each of the 10 legs. Half points are also awarded at seven scoring gates along the route and for the seven ‘in-port’ races.

On October 4, Telefonica Blue, skippered by Dutch veteran Bouwe Bekking, took an early lead in the competition by winning the first of seven in-port regattas.