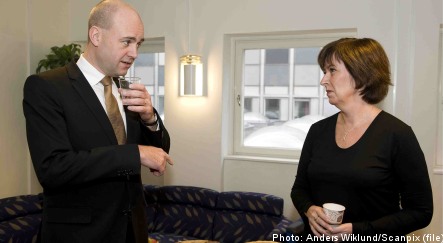 The Moderates received the backing of 24.6 percent of the electorate in the Sifo poll and the 3.5 percent change is the only statistically significant change in the survey, published in several regional newspapers.

Media exposure in connection with the finance crisis has benefited the party, believes both political science professor Sören Holmberg and the head of Sifo’s opinion survey Toivo Sjörén.

Despite the Moderate gains the tripartite opposition retains a 12.7 point lead, down 2.2 points on the previous poll. The opposition commands the support of 54.3 percent of the electorate to the four party Alliance government’s 41.6 percent.

“No political bloc has ever been this far behind with two years before an election and managed to recover the deficit,” Holmberg said to Svenska Dagbladet.

The survey was conducted amid the controversy over discussions regarding the structure of an opposition government.

The far right Sweden Democrats fell to below the 4 percent threshold for claiming seats in the parliament and had the support of 3.5 percent (-0.9) of voters.

The voter survey was carried out between October 6th-16th and interviewed 1,889 people.