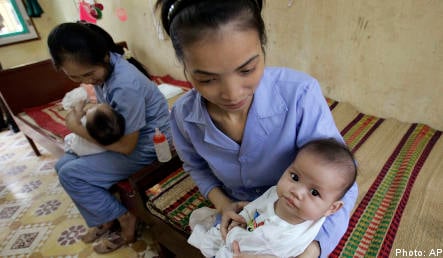 “It’s a really tough blow for many families who are waiting. Vietnam is also the only country many can consider adopting from,” said Jan Göransson, head of the Adoptionscentrum adoption agency, to Sveriges Radio.

Vietnam is popular among Swedes looking to adopt because it allows adoption by single parents and doesn’t have strict age restrictions like many other countries.

According to Sveriges Radio, a child from Vietnam is adopted by Swedish parents about once a week on average.

However, the government has decided not to extend its current agreement with Vietnam, which runs out in the autumn of 2009.

The decision, to be announced on Thursday, comes following reports which raise troubling questions about Vietnam’s adoption practices.

An investigation by the Swedish government revealed that biological parents in Vietnam are not always aware that their children have been put up for adoption. There are also reports that money has been paid in exchange for children to be adopted.

The United States has already banned further adoptions from Vietnam due to corruption concerns and evidence that mothers had taken payments to put their children up for adoption.

In addition, Vietnam has refused to sign on to international regulations governing adoptions.

According to health minister Göran Hägglund, the government’s ruling means that adoptions from Vietnam will cease within a year.