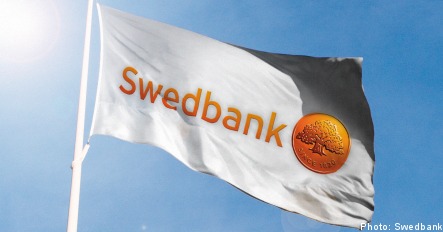 Swedbank reported an operating profit of 3.11 billion kronor ($398 million) for the third quarter, beating a Reuters poll forecasting the bank’s profits would land at 2.94 billion kronor.

Nevertheless, Swedbank’s profits fell 15 percent from the 3.67 billion kronor it reported for the same period in 2007.

“The global economy and financial system is being affected by unprecedented turbulence,” Swedbank CEO Jan Liden said in a statement.

“The financial crisis has spread rapidly and is impacting the development of the real economy worldwide, and Swedbank’s domestic markets are no exception to this.”

Swedbank’s shares on the Stockholm exchange rose 5 percent on the report, to a high mark of 79.25 kronor.

“You have read in the papers that the main owners have had discussions about different types of capital injection and I can confirm that is a discussion which is ongoing,” Liden said.

Shortly before noon, stock in the bank was trading at 66.50 kronor, down nearly 11 percent on the day and more than 15 percent from the morning high.

However, Liden said that the bank was well-capitalized already although capital levels are a little lower than those of some European banks.

Swedbank’s main shareholders are savings banks in Sweden and its own funds, which together hold around 36 percent of the bank’s share capital.

Liden also said that the situation in the key Baltic region, which accounts for around 30 percent of profits, was worse than Swedbank had foreseen six months ago.