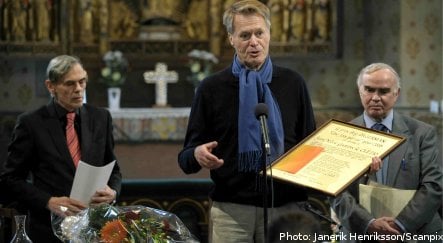 Le Clezio travelled to the village of Älvkarleby near Gävle in central Sweden on Saturday to accept the Stig Dagerman award, which includes a diploma and a cheque for 50,000 kronor ($6,300).

“Jean-Marie Gustave Le Clézio fills pages with the most beautiful combinations of words, drawn from the recognition of the unjust and unjustifiable existence of the weak and excluded,” jury member Anton Söderhall told AFP.

The church in Älvkärleby was full with onlookers already an hour before Le Clezio’s arrival. Just a stone’s throw from the church is the farm where Stig Dagerman grew up.

Le Clézio paid tribute to the author and, visibly moved by the dramatic scenery of Dagerman’s home county, claimed that he had gained a greater understanding of a writer that he had considered a kindred spirit since his youth.

“This has been a very rewarding visit. I had no idea that it would look this. When I later read about the river I will have this picture in front of me.”

When Le Clézio read The Snake (Ormen) in the 1960’s it made a profound impact, he said. During the ceremony in Älvkarleby he received a copy of the original edition, signed by Dagerman himself.

The Stig Dagerman prize had been announced in June.

Le Clézio is not the first writer to have claimed the Stig Dagerman and Nobel prizes in the same year. Austrian author Elfriede Jelinek also won the double in 2004.

In announcing the Nobel prize for Le Clézio earlier this month, the Swedish Academy called the 68-year-old an “author of new departures, poetic adventure and sensual ecstasy, explorer of a humanity beyond and below the reigning civilisation.”