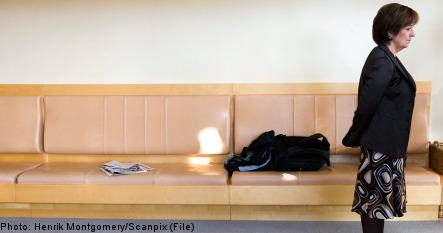 The drop in support equates to the loss of 340,000 voters in one month.

At the same time, support for the Moderate Party increased by 4.5 percent, while Left Party support jumped up 2.3 percent.

“This is the most dramatic swing I’ve seen in one month during my 15 years working with opinion polls,” said Nicklas Källebring from the Synovate polling firm, which carried out the survey.

Support for the Social Democrats stood at 39.5 percent in October, down from 45.7 percent in September. The losses came from all voter groups, but were largest among voters under 30-years-old and among men.

The Moderates’ support moved up to 26.1 percent of voters, the equivalent of adding 250,000 voters. Men under 45-years-old and women over 45 accounted for most of the increase.

The Left Party registered its best result since February 2005, with support jumping 2.3 percent, a nearly 50 percent increase from the party’s September result.

The changes from September for the Social Democrats, Moderates, and the Left Party are all statistically significant.

Measured together, voter support for the Social Democrats, Green Party, and Left Party measured 54.2 percent for October, against the centre-right governing Alliance’s result of 42.3 percent.

The gap between the two party blocks now stands at 11.9 percent, down from September’s 19.1 percent.

In conducting the poll, asked 2,449 people how they would vote if the election were held today. The results of the survey were published on Friday in the Dagens Nyheter newspaper.