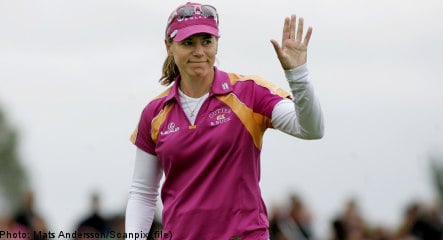 Liying’s two-day total of 11-under 133 puts her five strokes ahead of South Korea’s Han Min-jee and Sörenstam.

Liying, who posted birdies on the 3rd, 5th, 11th and 18th holes, said she had played it safe in the second round to maintain her lead.

“I told myself to play it safe and add a few more birdies to strengthen my position,” said Liying.

“There’s no pressure on me. I’ll go into the final round and try and pick up a couple of strokes to keep my rivals out of reach.”

Karen Lunn of Australia and fellow Ladies European Tour player Anna Rossie of Italy recorded the lowest total in the second round by posting a five-under 67.

Sörenstam, the favourite to win before the start of the contest on Friday, said she thought she had played well.

“I hit 17 greens again today. I still give myself a chance to win this tournament. It’s not over until the full playing schedule is over.

“I feel very comfortable after playing three times (one pro-am) in this course. Some of my putts braked near the lip of the cup. I hope the putts will roll in tomorrow,” she said.

The Swede is calling it quits at the end of the season to start a family and focus on her business interests and is targeting her fourth victory this year.