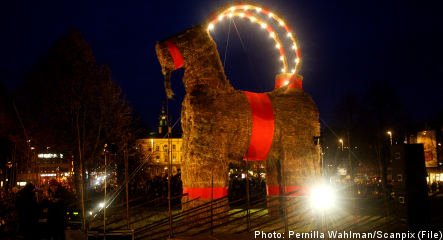 The flame repellent coating applied to the gigantic straw animal will not be used this year after it caused the goat to become soaking wet and lose its sheen.

“He turned a dull shade of brown. We really want a yellow goat. And being somewhat vain, the goat also wants to look his best,” goat committee spokeswoman Anna Östman told The Local.

But the fire-proof goat did succeed in standing tall for two consecutive Christmases, a feat not always achieved in a town where arsonists have often lurked. The goat has been burned to the ground no fewer than 22 times.

“In previous years we’ve usually had a second goat in reserve but that’s not the case this year. If somebody sets fire to him, that’s it – he’s gone,” according to Östman, who said the fact that there was a double waiting in the wings often seemed to encourag budding fire-starters to torch the goat.

The straw used in the construction of the Gävle goat is a byproduct of the grain used to distill the locally produced Mackmyra Whisky.

And according to Anna Östman, the environmentally friendly goat is delighted to have matured to a grand old “whisky age”.

This year the Gävle goat celebrates its 42nd birthday. The undisputed leader of Sweden’s caprine community is to be woven into existence later this month and will be unveiled on November 30th.