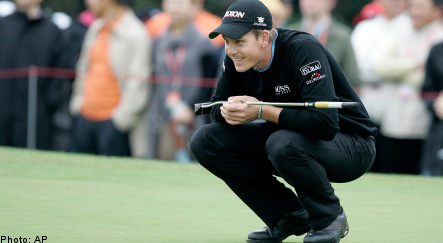 World number three Garcia fired a four-under par 68 to catch Stenson, who carded a 69. The pair ended the second round on 10 under, one stroke ahead of Australian Geoff Ogilvy and young Englishman Oliver Wilson.

World number two Phil Mickelson of the United States was at eight under after shooting a two-under 70, alongside Northern Ireland’s Graeme McDowell.

Ogilvy and McDowell shot up into contention with seven-under 65s, the equal best rounds of the day at the Sheshan International Golf Club.

The second round was played a day late after the whole of Friday was washed out by heavy rain.

Damp conditions prevented an early start on Saturday, meaning organisers could not catch up as hoped. They will now almost certainly have to push the tournament into a fifth day on Monday.

Some of the players began their third rounds in fading light on Saturday.

The HSBC Champions has attracted one of the best fields ever to have played in Asia, and the leaderboard reflected the enormous quality on display.

Among the other big names still in contention, Australian Adam Scott was in a group of four players at seven under after shooting a 71 on Saturday.

Ireland’s Padraig Harrington, winner of the British Open and PGA Championship this year, was at five under after shooting a two-under 70.

Rising American star Anthony Kim was sitting alongside Harrington at five under, although he would have been disappointed with his one-over 73.

The Asian and European tours co-sanction the HSBC Champions, and Thailand’s Prayad Marksaeng maintained his position as the best from Asia with a 70 that placed him tied for 11th at six under.