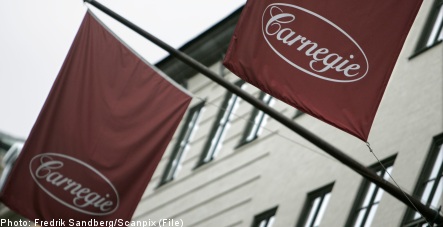 Carnegie Investment Bank had “presented a strong action programme” containing “a number of measures to ensure stability and guarantee the company’s financing,” it said in a statement.

The news came as Sweden’s Financial Supervisory Authority (Finansinspektionen – FI) prepared to publish the results of a probe into Carnegie’s internal management and control and possible sanctions against the company, including perhaps withdrawing its licences.

The share-issue plan was “among other things … conditional on Carnegie keeping its licences,” the investment bank said, adding that it would provide more information before trading starts on Tuesday.

Last month, the Swedish central bank said it would lend Carnegie one billion kronor to resolve its “temporary liquidity problems.”

Carnegie, which conducts stockbroking, equity analysis and trading and asset management in eight countries, has been heavily criticized in recent years.

A year ago, Finansinspektionen for the first time ever imposed the maximum Swedish fine of 50 million kronor on the investment bank and sacked its chief executive and board after a trading scandal.

The firm has also been criticized for a lofty bonus system said to have encouraged excessive risk taking.