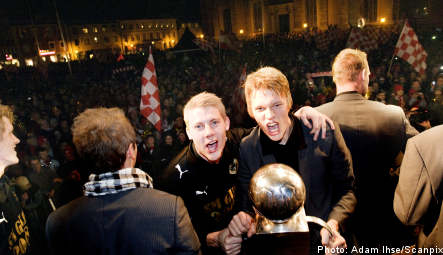 A huge crowd gathered in the centre of the town on Sunday night to welcome home their heroes and celebrate the first Allsvenskan victory in the 98 years since the club was founded.

A blend of Brazilian flair and local talent kept Kalmar ahead of the chasing pack for much of the season.

Names like Ingelsten, Elm and Rydström shared centre stage with Sobralese, Ferreira and Santin as Kalmar outclassed the opposition time and time again, scoring 70 goals in 30 games on their way to the title.

Patrick Ingelsten’s late equalizer in a 2-2 draw with Halmstad meant that the title was not decided on goal difference, which in any case very much favoured the team from the south east.

Only Elfsborg managed to stick with the blistering pace set by Nanne Bergstrand’s side.

Heading into their final game against Gefle, Elfsborg knew that nothing short of a miracle was going to bring the Allsvenskan back to Borås for the second time in three seasons. Despite their disappointment, a 2-1 victory was a fitting way to end a very solid season.

The three main Stockholm clubs, so dominant earlier in the decade, fell by the wayside early in the season. AIK’s late revival earned them fifth spot, while Hammarby (9th) and Djurgården (12th) failed to impress.

A hotly tipped Malmö team also failed to mount a serious challenge, although a 6-0 final day victory over Sundsvall put a bright sheen on an otherwise disappointing season.

That defeat also put paid to Sundsvall’s last chance of climbing out of the relegation zone. They will be joined in Superettan by Norrköping, who despite already being relegated rounded off their season with a 5-2 demolition of Hammarby.

Ljungskile, finishing third from bottom, will have their fate decided in a qualification match over two legs with Brommapojkarna, who are keen to return to the top flight after just one season in the lower division.