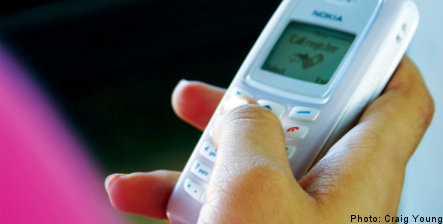 “In 1984 a four-year-old girl was murdered. She was strangled by her stepfather. If you don’t send this to 10 people within 30 minutes she will come and sit on the edge of your bed and stare at you with her dark eyes full of sorrow. And on the 13th night she will strangle you slowly to death. Sleep well,” reads one such text message received by children as young as 10-years-old, according to the Svenska Dagbladet (SvD) newspaper.

The principal at Nytorp School near Gothenburg, Ata Ala, is concerned about the effect the messages may have on the school’s fourth graders.

“I think it sounds horrible. It’s clearly over the line if someone is sending this sort of thing to children,” he told SvD.

“Children take this sort of thing seriously. At their age, it’s not always easy to know what’s real.”

Ala said teachers at the school have been in touch with the police about the matter, only to be told that the frightening text messages can’t be reported as a crime because they don’t involve an actual threat.

“If someone is scared and thinks it’s uncomfortable it can be considered a threat and that can be reported. Then it’s a question of what the police can do, and who has sent the original message,” he said.

The haunting message of strangulation isn’t the first to make the rounds in mobile phones belonging to young Swedish school children.

In early September, several 12-year-old girls in Skåne in southern Sweden received a different but no less ominous text message:

“Send this message within five minutes and you’ll manage not to be raped and assaulted within a year, send it to ten different girls, and HURRY UP, this is only a warning!”

At the time, police in Skåne doubted the message could be classified as a threat, but didn’t rule out the possibility.

Maria Wiklund from the Frölunda police department near Gothenburg told the Göteborgs-Posten (GP) newspaper it was difficult to determine if the message met the standards for qualifying as an illegal threat, adding that it depends in part on the risk of a crime actually being carried out.

Either way, she said, the police would allow victims to file a complaint.

“If someone is scared, we would obviously write up a report,” she told GP.

According to Wiklund, schools are best equipped to counteract the unsettling text messages through moral and ethical discussions.

“Students need to understand that they can’t believe in the threat and send it on. That is best done in schools where there are large groups of young people with whom the staff can be in contact,” she said.

GOTHENBURG
How to show your parents a good time in Gothenburg