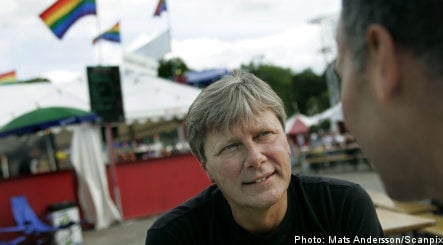 According to Ohly, the gender neutral marriage law currently under consideration is only a first step.

All political parties in the Riksdag, with the exception of the Christian Democrats, have given their support to a legislative proposal which would allow for same-sex marriages.

The current measure allows pastors or other officiates to refuse to perform wedding ceremonies for gay couples if they so choose.

The Left Party wanted to go further than the current proposal and remove the exception for pastors who wish not to wed same-sex couples.

“We weren’t able to get the others to go along with that and what’s most important now is to move forward with gender-neutral marriage,” said Ohly.

“In the long run it’s inappropriate to be allow discrimination like this. We don’t think that someone should be allowed to refuse to wed same-sex couples.”

If Ohly has his way, a pastor who says no to marrying a gay couple would lose the right to perform wedding ceremonies.

The three opposition political parties have presented their own gay marriage legislative proposal, while the centre-right Moderate, Centre, and Liberal Parties plan to present a separate proposal soon.

It remains unclear if the six parties will be able to come together around a single, common proposal while in committee.

“We have a proposal which we don’t plan on walking away from,” said Ohly.

Both proposals would allow homosexual couples the right to be married in Sweden starting on May 1st, 2009.