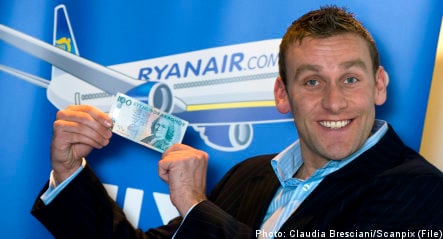 “We have plans to launch a service to the east coast of America,” Ryanair spokesman Stephen McNamara told The Local.

“Our first routes will be to New York, Boston and Washington, with Florida and Chigago also hopefully joining. Depending on the success of these flights, we will then roll out other routes to the west coast and onwards.”

Ryanair’s current fleet of Boeing 737 planes are not suitable for transatlantic flights, so the company would have to invest in a new armada of larger planes to accommodate their new, longer routes.

“We are waiting for the price of the aircraft to come down. We have been able to secure a low price from Boeing for our 737s because we buy so many and are hoping to do the same again,” explains McNamara.

“Our team is monitoring the prices from Boeing and Airbus, although we are not in discussions with them as yet.

“When we feel the price is right, then we will proceed with our plans and a transatlantic sister company to Ryanair will be formed.”

This development is not expected to be imminent, as from the point of commissioning aircraft, customers will have to wait another 18 months before the first flight dates are announced.

Although flights to America from Skavsta are unlikely to be seen within the next two years, O’Leary promises vast savings once they do arrive, with economy cabin seats starting from €10 one-way.

The Visit Sweden tourism agency said it welcomed any moves that would facilitate travel to Sweden.

“There are three decisive factors for a destination to be successful: ease of access, attractive experiences and effective marketing,” Thomas Brühl, CEO of Visit Sweden, told The Local.

“More airline routes from the US would contribute strongly to developing the number of American visitors.”

Ryanair’s plans for Europe to USA budget flights first came to light at a conference in Düsseldorf in June of this year.

A controversial video clip from the conference, in which Ryanair talked up new services for business class travelers, was later leaked onto You Tube.

But despite achieving a tenfold increase in passenger numbers from 2000 to 2008, would a transatlantic expansion be prudent in view of the current economic crisis, and particularly in light of Sterling’s recent demise?

“What Ryanair has always successfully done is to bring a business model into markets suffering from extremely high prices. The transatlantic market hasn’t become open to low costs yet.

Ryanair is already the world’s largest carrier of international passengers, according to figures compiled by the International Air Transport Association. More than 49 million passengers travelled on international flights with the low-price airline in 2007.

See also: Michael O’Leary’s much talked about comments at a conference in Düsseldorf.