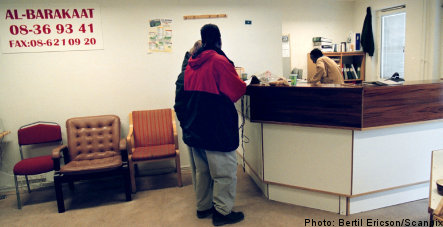 Abdirisak Aden has been a board member in al Barakaat and found himself on the UN’s sanctions list in 2001 due to suspected terrorist ties.

Although Aden’s name was later removed from the list, he expressed his frustration that the EU still believes al Barakaat has ties to terrorism.

“It’s unacceptable and a legal violation which has gone on for a long time,” he told the TT news agency.

In September, the European Court of Justice nullified a 2005 order to freeze the assets of al Barakaat, an informal hawala banking network used by members of the Somali diaspora in Sweden to send money to relatives back home.

According to EU law, the Commission doesn’t have the right to circumvent decisions by court, but must instead adjust policy according to the court’s rulings.

But the Commission said it wants to keep al Barakaat on the terror list for reasons similar to those used by the UN, namely that the banking network’s founder worked directly with al Qaeda founder Osama Bin Laden.

The Commission believes that views of the UN, rather than those of the European Court of Justice, should be the deciding factor in the matter.

In a letter reviewed by Sveriges Radio, the Commission writes that it “intends to adopt a legal document” which will result in al Barakaat remaining on the list of terrorist organizations.

Without due process, any presentation of evidence, or a chance for the three to launch an appeal, their assets were frozen, as were the assets of al Barakaat, with which all three were involved.

In September 2008, the European Court of Justice ruled that the EU’s anti-terror sanctions violated the suspects’ fundamental rights in a case related to al Barakaat.

In annulling the 2005 ruling, the court concluded that “the rights of the defence, in particular the right to be heard, and the right to effective judicial review of those rights, were patently not respected”.

The court gave the EU Commission until December of this year to alter its sanctions against al Barakaat, although exactly how the sanctions should be changed remains unclear.

The al Barakaat International Foundation, as it is formally known, has about 1 million kronor ($124,000) in an account with the SEB bank, money which today remains frozen due to the EU’s sanctions.