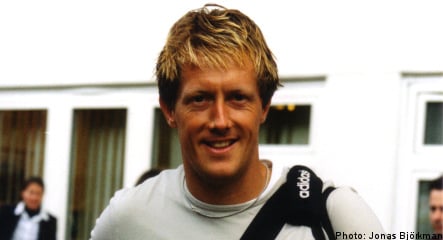 The Swede was treated to a special ceremony at Qi Zhong Stadium after he and Ullyett were knocked out of the Tennis Masters Cup doubles.

“They reminded me a little bit that this is obviously maybe my last match,” said Björkman, who noticed preparations for the farewell ceremony during the match.

“You know, I was trying to do everything possible to stay alive one more day, or maybe two.”

Björkman won all four doubles Grand Slams as well as the 1998 Davis Cup with Sweden and also reached the 1997 US Open singles semi-final and the last four at Wimbledon just two years ago.

Björkman and Ullyett fell to Poland’s Mariusz Fyrstenberg and Marcin Matkowski as the Swede failed in his bid for a third year-end title.

“I still think it’s great to end my career in the biggest event of the year, even if I would have gone further. But you can’t have everything,” he said.

“I’ve been mentally prepared for this because I’m mentally very ready to retire. I’ve been very fortunate to be able to play for so long.”

Björkman, who will now concentrate on editing a Swedish tennis magazine, cited the 1997 US Open loss to Britain’s Greg Rusesdski as his biggest regret.

“Obviously losing to Greg Rusedski in the semi-final was a tough loss because I think that was a chance for me maybe to go all the way,” he said.