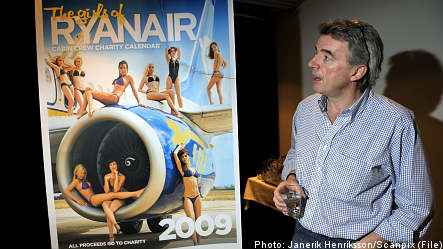 Top of their mailing list is feminist Liberal Party politician Birgitta Ohlsson, who last month urged consumers to boycott the budget carrier over its “old-fashioned” response to complaints about an advert featuring a young woman in a skimpy school uniform.

“I can’t see what the problem is, there are a huge number of similar calendars on the market and it’s raising money for charity. I don’t think it’s any different to a calendar showing firemen or rugby players.”

McNamara continues: “I’m sure Birgitta will hate it – she probably has pictures of pussy cats and dogs running through fields up on her walls. However, it would be pretty difficult to shift that sort of calendar on our flights.”

Also on their list of high profile recipients is the ERK, the Swedish advertising industry body which focuses on regulating sexist advertising.

“I haven’t actually received the calendar yet, but I can make a guess at what it will look like,” explains ERK secretary Tobias Eltell.

“It’s very kind of him to send a copy, but I can’t really see why he has done so as it doesn’t change the ERK’s criticisms of Ryanair’s advertising policies.”

“It is sad for him that he doesn’t seem to understand the meaning of the council’s expression in this matter. He seems to think that naked girls and his air company have a connection,” says Eltell.

McNamara refused the possibility of a new, male version of the calendar:

“Quite simply, our male staff aren’t good looking enough and it wouldn’t really appeal to our target audience.”

“I certainly won’t be making an appearance on a Ryanair calendar anytime soon. The only place I expect to get pinned up is on Birgitta Ohlsson’s dart board.”

When questioned, Ohlsson declined comment on the new calendar, stating: “I think I have said all there is to say on the subject of Ryanair.”