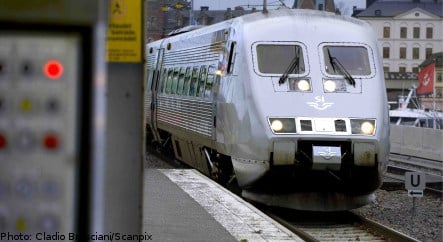 Punctuality for the high-speed X2000 trains has previously this year been between 62-79 percent. Across the whole stock of SJ trains the figure climbs to 86-92 percent.

Punctuality and service has now declined to below a level that is acceptable, according to CEO Jan Forsberg.

One of the reasons behind the decline is the increase in the use of the trains to meet spiralling demand for rail services in the wake of climate change concerns. This has taken its toll on the state of the trains with declining punctuality in recent years as a result.

SJ has concluded that maintenance of the track network has not matched the increase in demand for rail services. The new program of measures announced by SJ to tackle the service problems will therefore be coordinated in direct cooperation with the National Rail Administration (Banverket).

The administration has appointed a national coordinator for X2000 services and will also reinforce its rail traffic control unit to ensure a rapid response to problems in the network.

The administration’s works and maintenance department will be instructed to focus its resources on X2000 trains during each and every journey. SJ will present further measures to tackle the problems in the coming weeks.

All 40 SJ X2000 trains will be recalled for maintenance checks in time for the new year. So far checks have been carried out on 11 trains.

A specially assembled group of experts will accompany the team working at the maintenance depot in Hagalund to oversee the work and ensure that directives are being met.

The measures were presented at a combined press conference of SJ and Banverket on Friday.

In addition SJ will put pressure on its sub-contractors to work hard to catch up on the maintenance backlog.

Furthermore engineers will accompany selected X2000 trains on their daily journeys to ensure any eventual problems are dealt with swiftly.

SJ has calculated that the measures will cost an additional 50 million kronor ($6.4 million) up to and including the first quarter 2009.

SJ has also announced plans to invest a further 500 million kronor to ensure the operations of its stock of X2000 trains in the long-term.