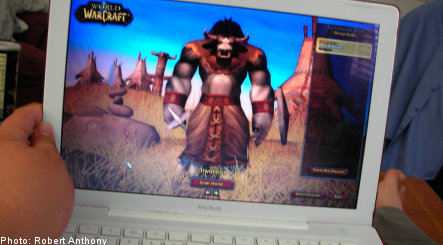 The boy was one of seven friends who had gathered on Saturday at the 15-year-old’s home in Laholm for to play the video game, a new version of which was released last week in Sweden.

“They played all day and all night. Maybe they got a few hours of sleep. They ate a little food and breakfast at their computers,” the boy’s father told the Kvällsposten newspaper.

At around 2:00pm on Sunday, the boy had what appeared to be an epileptic seizure.

“We were terrified and called rescue services,” said the father.

At the hospital, doctors said the boy’s bodily systems had been thrown off by a combination of sleep deprivation, lack of food, and too long a stretch of concentrated game playing.

While the boy is expected to make a full recovery, his father said he plans on limiting the amount of time his son is allowed to play computer games.

He has taken it upon himself to warn parents of the other boys about the dangers of extended game playing.

“They also think the boys need to reduce the amount of time they play and will themselves be more vigilant,” said the father.

Officials from the Game Over treatment centre in Linköping in central Sweden have noticed a spike in calls from concerned parents since the release of the latest World of Warcraft installment, Wrath of the Lich King.

“It’s been a huge problem. We have parents who call everyday and ask,” said Game Over’s Emilie Backlund to the Svenska Dagbladet (SvD) newspaper.

She has seen a steady rise in computer game addiction, with most cases stemming from those playing online fantasy games such as World of Warcraft and Counter Strike.

“And it’s not only a problem for young people. Adults have also contacted us and it really doesn’t matter how old you are,” Backlund told SvD.