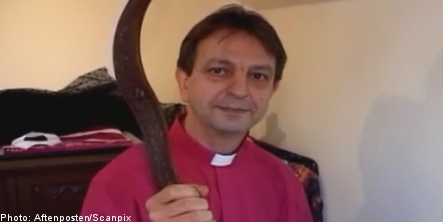 Originally, the Legal, Financial and Administrative Services Agency (Kammarkollegiet) had refused the church’s registration application on the grounds that its name may offend Christians.

But the church’s founder, artist Carlos Bebeacua from Lövestad in southern Sweden, won his appeal to the county administrative court.

If the agency does not appeal the court’s decision within three weeks, then it must process Bebeacua’s application to register the church, which he founded in the early 1990s.

According to the Skånska Dagbladet newspaper, the idea for the church came to Bebeacua, who is the church’s self-appointed cardinal, after a painting of his entitled ‘The Madonna of Orgasm’ sparked protests requiring police action during the 1992 World’s Fair in Seville, Spain.

“The orgasm is God, the orgasm should be worshiped,” Bebeacua told the Kvällsposten newspaper.

“The orgasm is the ultimate feeling of lust, it shouldn’t be limited to ejaculation. You can reach it through art or by looking at a landscape and thinking ‘Wow!’”

According to Bebeacua, the church has a few hundred followers, and he hopes that registering the Madonna of Orgasm Church will get more people to consider the orgasm as God.

The church only has priestesses and its scriptures are called the Catechism of the Orgasm. The only gospel preached is the gospel of sex.

“It’s so we do what we know is right and good,” Bebeacua told Kvällsposten.

During ceremonies, the priestesses read verses and eat fruit and drink juice. Sex isn’t the focus, but it’s not forbidden either.

“There’s nothing dangerous in what we say, we’re harmless. It’s just that we have our doubts about established religions,” he told the TT news agency.