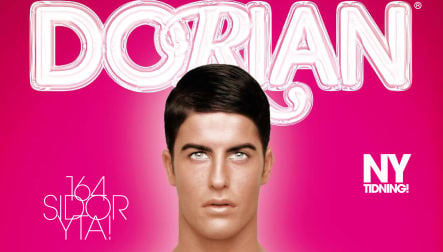 Dorian Magazine describes itself as Sweden’s only commercial lifestyle magazine for gay men.

The latest issue, which hit newsstands in major cities in Sweden and Norway on Thursday, deals with the theme of superficiality.

In order to add more depth to their reporting, the editors decided to undergo comprehensive makeovers, including variety of cosmetic surgery operations.

“Dorian Magazine represents an artistic fantasy world with an idealized beauty. Having the editorial team undergo plastic surgery in order to get insight into the ideal we promote was almost a question of credibility,” said the magazine’s creative and fashion director, Jake Rydqvist, in a statement.

Rydqvist chose to have some skin removed above his eyes, while editor-in-chief Benjamin Falk elected to have liposuction performed on his chin, according to the Expressen newspaper.

“In every commercial magazine there are pictures and advertisements which have been retouched. Editors-in-chief who deny this are hypocrites. In particular when one is trying to promote a healthy and natural ideal in a politically correct way, while at the same time as they themselves get operated upon,” said Dorian’s editor-in-chief Benjamin Falk.

Falk said he would recommend plastic surgery to others, but cautioned that the changes that come with it are far from life-altering.

“I absolutely recommend it to people who want to freshen up their looks a little, but people shouldn’t believe that plastic surgery will change one’s life of they are not already happy and feel good about themselves,” he told Expressen.