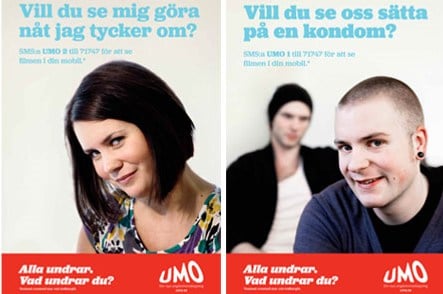 Västtrafik, which operates public transit in Sweden’s second largest city, has put a stop to the ad, which is part of a campaign for UMO.se, a new web-based helpline for young people.

The ad features two young men and provides a text messaging code which allows people to download a short film featuring a tongue in cheek demonstration of how to put on a condom.

According to Västtrafik, the ad has been banned because it could be considered offensive, reports the newspaper Metro.

But Love Nordenmark from UMO.se believes Västtrafik has missed the point of the ads.

“The point of the campaign is to have young people know how to find UMO.se, where they can get accurate, clear information about safe sex, among other things,” she said in a statement.

“UMO wants to encourage condom use in a playful way and in so doing contribute to fewer people being infected by sexually transmitted diseases.”

Nordenmark added that the ads had been tested in a focus group and were found to be entertaining and provocative.

Public transit systems in Stockholm and Malmö have allowed the controversial ad to run.

While not allowing the condom ad, Västtrafik has approved a different UMO.se ad featuring a girl with the text, “Do you want to see me do something I like?”