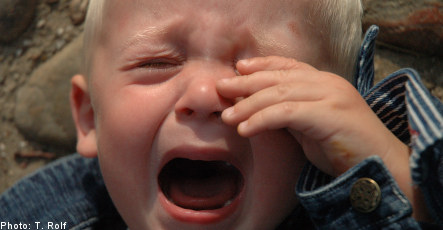 For the past several months, officials from the Swedish Tax Agency (Skatteverket ) have been sending letters to parents of children in the agency’s registry who lack a first name.

In the letters, the agency informs the indecisive parents that they face fines as high as 10,000 kronor ($1,200) if they don’t notify the agency of their child’s name promptly.

“It’s every child’s right to have a name,” said the Tax Agency’s Thomas Norgren to The Local.

According to Swedish law, parents are to have their child’s first name registered with the agency by the time the child is three months old.

But some parents wait until after their children are registered for daycare, which usually takes place around a child’s first birthday.

Norgren explains that, while the law isn’t new, he and his colleagues only recently turned their attention to the issue upon realizing just how many Swedish children in their registry lacked a first name.

“We decided that this is our job, after all,” he said.

“That’s what the law says; that it’s important for every child to have a name.”

Since then, the agency has been informing parents of their responsibility to register their child’s name or face the consequences.

Currently, the Tax Agency is working on 400 known cases of “nameless” children, but Norgren believes there are many more.

“Right now are efforts are concentrated in the south of the country since that is the region for which our office is responsible,” he said.

Specifically, delinquent parents residing in Jönköping, Kronoberg, Kalmar, Blekinge, Skåne, as well as the island of Gotland have been contacted by the agency.

“We know there are more out there,” he said.

“But it’s important to point out we’re talking about a very small fraction of cases compared to the [more than 100,000] children who are born in Sweden each year.”

The agency’s efforts appear to be paying dividends, however, as most parents have been quick to respond to the Tax Agency’s letters by sending the agency word of their child’s name.

However, a few cases have gone as far as the Country Administrative Court (Länsrätten), although no fines have been collected as of yet.

NAMES
The ‘satanic’ name you can’t call your baby in Sweden
Url copied to clipboard!