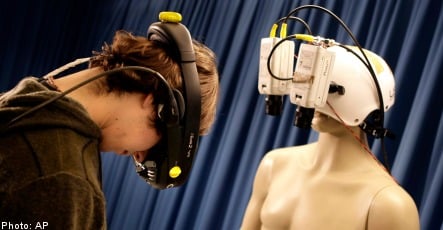 “In one of the experiments, subjects swapped bodies with other people and shook hands with themselves without the illusion being broken,” the institute said in a statement issued on Wednesday.

“This shows how easy it is to change the brain’s perception of the physical self,” Henrik Ehrsson who led the project said.

“By manipulating sensory impressions, it’s possible to fool the self not only out of its body but into other bodies too,” he said.

In one experiment, the head of a mannequin was equipped with two cameras connected to two small screens placed in front of the subjects’ eyes so they saw what the dummy “saw”.

“When the dummy’s camera eyes and the subject’s head were directed downwards, the subject saw the dummy’s body where he or she would normally have seen his or her own body,” the institute explained.

The illusion of body-swapping was created when a scientist touched the stomach of both with two sticks. The subject could then see that the mannequin’s stomach was being touched while feeling, but not seeing, a similar sensation on his or her own stomach.

“As a result, the subject developed a powerful sensation that the mannequin’s body was his or her own,” it said.

In another experiment the camera was mounted onto the head of another person.

When this person and the subject, who was wearing glasses that showed what the camera was showing, turned toward each other to shake hands, the subject perceived the camera-wearer’s body as his or her own.

The illusion worked even if the people were of opposite genders, but it was not possible to fool a person into believing he or she was an object such as a chair.

The research could be of practical use in virtual reality applications and robot technology, the institute said, as well as other fields.

“We can raise questions about how we perceive ourselves and how we think about belonging to a certain group. Maybe we can try to combat prejudice. The technology could also be used within the fields of education, medicine and for games,” Ehrsson said.