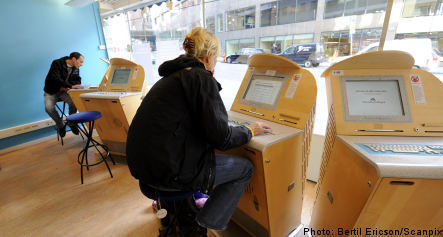 Unemployment is expected to increase most among young people, but also significantly among immigrant groups.

“We have two very tough years ahead of us,” said Tord Strannefors at the agency.

“Unemployment has already started to climb and despite the high level of redundancies it is the youngest, that are on their way into the jobs market, that are the hardest hit.”

Figures for those in employment are expected to decline across Sweden.

During 2009 a total of 35,000 industrial jobs could disappear, the agency forecasts. The construction sector alone is expected to lose 10,000 jobs next year.

The private service sector is shown to be feeling the pinch of the weaker economic cycle. The agency expects previous strong growth in the sector to turn, with the loss of 8,000 jobs next year.

The public and council sector has not been spared as recession bites and the agency reports that cut-backs are planned for next year.

The agency forecasts that Sweden’s GDP will decline by 1 percent next year.

However despite all the doom and gloom there are still opportunities. In 2009 up to one million new recruitments will be made.

“We are also at the cusp of a generation shift,” underlined Tord Strannefors.

The forecasts are based on interviews at 12,000 places of work within the private sector as well as interviews with all of Sweden’s local and county councils.