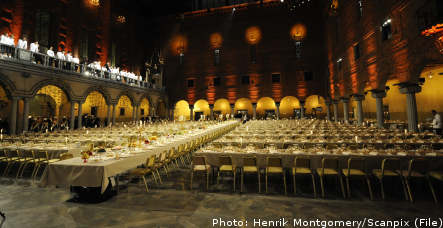 Nobel Prize winners and the assembled glitterati awoke on the big day to temperatures in Stockholm of three degrees Celsius, with temperatures forecast to remain above freezing throughout the day.

In accordance with tradition, the festivities are set to begin with the Nobel Prize awards at the Concert House at 4.30pm.

The medicine award in particular has been the source of some controversy, as US scientist Robert Gallo, whose role in the discovery of the HIV virus is widely acknowledged by his peers, was overlooked in favour of his French counterparts Françoise Barré-Sinoussi and Luc Montagnier.

Following the awards ceremony, the guests of honour will make their way to City Hall.

As has been the case for the last 35 years, the hall will be awash with a vast array of flowers imported from San Remo in Italy.

At precisely 7.02pm, a fanfare will sound and spotlights will be directed at the guests of honour as they enter the Blue Hall, where they will sit down to a meal prepared by a team of chefs headed by Stefan Eriksson and Magnus Johansson. As always, the menu will be kept secret until the last possible moment.

The seating arrangements place King Carl Gustaf XVI beside Françoise Barré-Sinoussi, while Queen Silvia will, as always, have Markus Storch, chairman of the Nobel Foundation, as her dinner partner.

At 10.30pm, the guests will leave the dinner table and make their way to the dancefloor in the Golden Hall.

As night gives way to morning, VIP guests will move on to a party at the Royal Institute of Technology (KTH). By then it will be time for avid viewers to switch off their sets, as television cameras are not allowed at the after party.