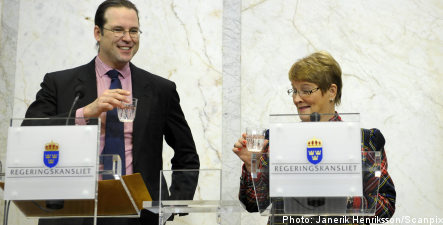 The measures “will take the form of increased investment in research and development and state credit guarantees for raising loans (from) the European Investment Bank,” the government said in a statement.

The announcement came just hours after the US House of Representatives approved a $14 billion lifeline for the teetering US auto industry.

Volvo Cars is owned by struggling US automaker Ford while Saab Automobile is owned by General Motors which has warned it could run out of money in the next few months without state aid.

The Swedish government, which had previously said it would await a US decision on a rescue package before announcing any measures, reiterated it would not take over the struggling Swedish car makers.

“We should not own companies,” Finance Minister Anders Borg stressed.

But, “with the financial woes that we have, we must meet the concerns in the car industry … and create conditions for them to be able to operate on the market,” he added.

Sweden’s car industry accounts for 15 percent of the country’s exports and, with some 700 companies and suppliers, employs about 140,000 people.

The three-part package unveiled on Thursday includes state credit guarantees up to a maximum of 20 billion kronor “to companies in the automotive cluster for raising loans (from) the European Investment Bank for conversion to green technology.”

The government will also provide three billion kronor for the creation of a state-owned company to conduct research and development in the automotive sector.

Enterprise and Energy Minister Maud Olofsson stressed the need for “renewal” in the industry towards environmentally-friendly cars.

“We need a long-term perspective. We intend to still have a car industry in Sweden in 20 years,” she said.

Finally, the government will provide rescue loans of up to five billion kronor for companies in financial crisis.

The proposal will be presented to parliament for approval, though no date for that was disclosed.

The head of the union IF Metall, Stefan Löfven, said it “was a positive announcement … Instead of people being thrown into unemployment they can now be kept on by the companies” and the carmakers can focus on developing new know-how.

“Then we can come back stronger when the situation turns around,” he told TT.

“The size (of the package) is a strategic signal from the government that it believes in Sweden’s car industry and that it is investing in the long-term,” he said.

The future of Sweden’s two carmakers has looked increasingly uncertain as sales have collapsed under the weight of the global credit crunch and a sharp economic slowdown.

Cash-strapped Ford has announced it is considering selling Volvo Cars, its last foreign premium marque which it acquired from the Volvo Group in 1999.

Volvo Cars has been hit hard by declining sales, as interest for its big, costly models dwindles.

In the third quarter, the company posted a net loss of $458 million, nearly three times its full-year 2007 loss of $164 million.

Volvo Cars has already said it will slash more than 4,600 jobs, out of 24,400 employees worldwide.

Meanwhile, GM, which has fully owned Saab since 2000, has said it would review the unit’s future and could put it up for sale.

Carlsson said the package sends an important signal to potential buyers that the Swedish carmakers “are going to be injected with plenty of environmental know-how.”

Sweden had previously announced that it would increase its research and development subsidies to 450 million kronor ($55 million) annually for 2009-2012, up from 430 million kronor this year, in an effort to support the industry.