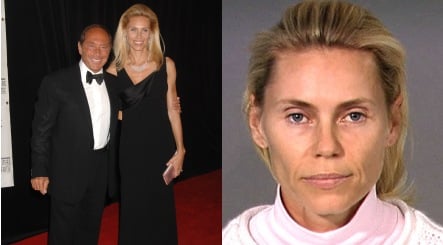 The pair clashed at their luxury home in California on November 28th. The 37-year-old former Miss Sweden runner-up became so angry while the couple argued that she launched a piece of ice at her husband’s head. The ice struck home and left the 67-year-old one time teen idol needing hospital treatment for a head wound.

When Anka returned to their home after receiving two staples in his head to close the wound he found Anna, whom he married in Italy in the summer of 2008, missing. Anka became worried and called the police.

When the police arrived they considered the wounds sustained by the veteran entertainer to be sufficient to arrest Anna Anka for domestic battery when she eventually returned to the house.

Paul Anka has not reported the assault to the police and the couple were keen to play down the clash, according to Aftonbladet.

“We are doing fine. Anna has had a tough time with her ex-husband over a custody battle,” he explained.

“It was a silly little episode,” Anna Anka said.

The Ventura county prosecutor’s office rejected the case a couple of days after the incident. According to local media reports police declined to confirm whether the case was dropped because Paul Anka refused to cooperate with the investigation.

Anna Anka was born in Bjuv in southern Sweden and moved to the USA in 1994 after having won Miss Hawaiian Tropic and been runner-up in the Miss Sweden beauty pageant.

Paul Anka is a singer of Canadian origin who first became famous as a teen idol in the 1960s with hits songs like “Diana”, “Lonely Boy”, and “Put Your Head on My Shoulder.”

The couple were married on Sardinia in the summer of 2008 and have one child together.