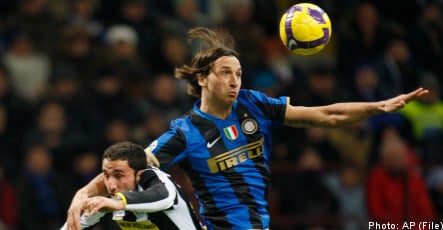 “When I think about how a player should be what comes to mind is players like Kaka, Ibrahimovic and (Lionel) Messi, who is a phenomenon and in two or three years will win the Ballon d’Or,” he said.

“Ronaldo is a good player but he’s certainly not the best. He deserved the Ballon d’Or because his team won the Champions League and Premier League, he played and he scored. But for me, Ibrahimovic is better.”

Ronaldo will get the chance to test his skills on the same pitch as Ibra when United and Inter meet in the Champions League second round in February and March.

It is the type of match-up that Ronaldo has faced before when talk of who is the best player in the world has arisen.

In the 2007 Champions League semi-finals United met AC Milan with Kaka out-shining Ronaldo as the Italians reached the final and the Brazilian went on to be crowned the world’s best player.

Earlier this year United played Barcelona in the semi-finals and although Messi was largely more effective than Ronaldo, the English team went through and Ronaldo went on to take the accolades.

But for Mourinho his enigmatic Swedish forward is the ideal player, more so than Ronaldo.

“Zlatan is in love with football, he has a big heart and he is emotionally aggressive,” continued the Inter boss.

“When I made him play many matches in a row, for the Italian football world I was doing what destroys children.

“But what I was trying to do was build a team with mental strength and he is in the perfect condition to win the Ballon d’Or. He should win it.”

While Mourinho seems to adore Ibra, he clearly has no such sentiment for Brazilian forward Adriano, who looks certain to leave the club sooner rather than later.

“When I arrived people said the change of coach could be good for him. At the beginning it was but after that he didn’t continue at 100 percent.

“To be a top professional a player doesn’t need his coach to control him. Adriano, though, needs a tutor, someone who stays close to him, whether that’s a friend, a team-mate or a relative. And that doesn’t interest me.

“President (Massimo) Moratti wants him to stay, and so do I but if he asks to leave I won’t stop him, he’s still got 10 years of football ahead of him.”

Even if he does leave, though, Mourinho said it is unlikely that he will be replaced by Didier Drogba.

“I’ve never hidden my special relationship with Didier but I don’t need another striker as I already have (Hernan) Crespo, (Julio) Cruz, (Mario) Balotelli and Ibrahimovic.

“But Drogba is more than a player for me, he’s a part of me, an extension of the coach on the pitch.”