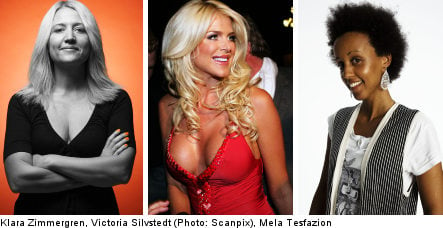 I apologise for bringing The Local to within an exclamation mark of such lurid gossip rags as OK! or HELLO! but over the past year I have been hanging out with a bunch of celebrities. The only trouble is, I don’t know who any of them are.

If you are addicted to the gossip columns, moving to Sweden need not hinder your vulture-like fascination with the lifestyles of the rich and famous. Both Aftonbladet and Expressen have ‘London’ and ‘Los Angeles’ correspondents whose job it is to keep the Swedish public up to date with the exploits of Posh, Paris and Pete Doherty. What sounds like a glamorous job, more likely involves sitting in a windowless office on an industrial estate, hastily translating best of the British and US tabloid press into Swedish.

Read about Lindsay Lohan’s bedroom athletics in The News Of The World on a Sunday and you can guarantee it will be an ‘Exklusiv’ in Aftonbladet on the Monday.

The trouble is, as an outsider, it is very difficult to get to grips with who the really famous people are in Sweden. Not only is the notion of celebrity somewhat at odds with the lagom mentality, but more importantly, we foreigners generally don’t watch a great deal of telly or read beyond the headlines that concern the familiar Botox enhanced faces that we already know.

Very occasionally a few Swedish names creep on to the front pages, but usually those who live outside Sweden such as Victoria Silvstedt or Zlatan. Then somewhere buried deep in the middle pages are the local glitterati, Sweden’s very own, who let’s be honest, we just skim past to get to the weather report.

I’m not, as a rule, too impressed by celebrity, but I am wondering where I can go just to bone up on household names without having to watch hours and hours of SVT’s Friday night karaoke love-in Doobidoo. The Swedish government needs to forget SFI for integration and give us a crash course on who’s who in the popular media.

I, for one, need it, because as my career as Sweden’s only Swinglish stand up comedian is taking off I find myself putting my foot in it more and more often.

Recently I was asked by a radio producer to go down to Gothenburg to do a recording for Radio P3. Being of a simple-minded nature, I was more concerned with how I was going to get there and weighing up whether or not I wanted to sit on a bus for four hours. The producer kept reiterating the name of the presenter.

“Klara Zimmergren” She said. I admitted this meant nothing to me.

“From Mia och Klara” …. still nothing…

“Winners of the Kristall for Best Comedy Programme” …..still nothing….

My response was just “Will there be a toilet on the bus?”

I spoke to a few Swedes and realised that I needed a big slap in the face as I was on the verge turning down the opportunity of meeting the Swedish equivalent of Jennifer Saunders or Tina Fey (Insert your favourite female comedian here).

Naturally, like most well-known Swedes, she was very down to earth, and yes, there was a toilet on the bus.

I’m trying to get better at finding out who people are, but there are still moments like the other night at a gig when I got chatting to a guy wearing a banana yellow jacket.

“I’m Sweden’s best known street magician” he said as he made pint of beer disappear.

Only once has it worked the other way. I was having a meal with Zinat Pirzadeh, comedian, actor and author, during which she was repeatedly asked for her autograph, which she would always graciously give (this is a euphemism for ‘she loved the attention’). I was impressed until she gave a particularly large flourish asking who she should write the autograph to, only to be told by the waiter to just fill in the amount and sign on the line.

Earlier this year, I was the secret guest on an episode of Vi i Femman, a cult TV programme that is a bit like University challenge for twelve year olds. Sounds exciting, but it mainly involved dressing up as farmer and asking the kids some questions in English with a bit of an “oo arr”. The presenters were the ubiquitous pair, Mela and Nassim, from Bollibompa (compulsive viewing for pre-teens) and I failed to endear myself to them by asking them what they were called and what they did on the production.

I think I won Mela Tesfazion over during the shoot when we improvised a little on the subject of my fictional orchards.

“If you think my apples are good,” I said, “You should taste my plums”

Although, in retrospect, I’m not sure she or SVT were fully aware of the long British tradition of double entendre.

My sister wins the prize for dealing with Swedish celebrity. She runs a bookshop in Brazil popular with the local Swedish crowd. A couple of weeks ago Björn Ulvaeus’ wife came in and got chatting.

“My husband’s pretty big in Sweden. He’s a member of ABBA.”

My sister paused for a second, then coolly replied,

“Never heard of them. Are they well known?”

Ben Kersley (www.speakup.se) is a writer and performer who has lived in Sweden since 2006. He is also Sweden’s only Swinglish stand up comedian.