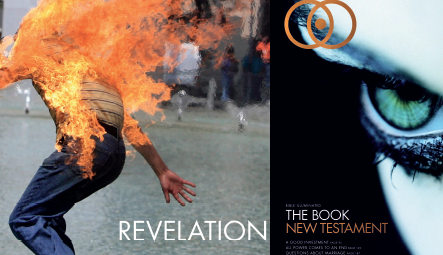 The release of “The Book” has caused a storm of protests from religious groups and it’s creator, Dag Söderberg, has been subjected to hate mail and threats on community website YouTube, according to the Swedish newspaper Metro.

The original Swedish version of “The Book” was launched in the spring of 2007 and was considered to contain images too sensitive for the more religious US market and has been duly purged of its more sexual content.

“It is because of cultural differences. Sex is very sensitive in the USA,” said Dag Söderberg to Metro.

Among the pictures that have been removed include a revealing busty pic of Swedish model Victoria Silvstedt and a graphic photograph of two men engaged in a passionate tongue-entwined embrace.

The book, a 286-page glossy high-end magazine, is marketed in the USA under the name Bible Illuminated: The Book. The New Testament edition has been recently released with the Old Testament scheduled for publication in the spring of 2009.

The publisher’s website invites prospective buyers to “bring a fresh perspective to our history and culture to a coffee table near you” by buying the magazine which blends the approved American Bible Society New Testament text with photographs and illustrations depicting the gospels.