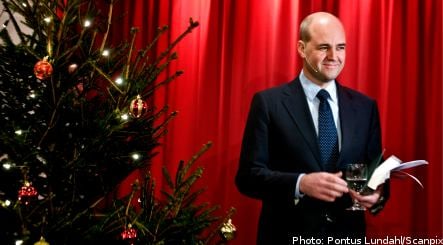 The new December poll compiled by Novus and presented on TV 4, showed that the Moderates had the support of 27.9 percent of the electorate, an increase of 6.6 percent since August.

The Moderates are primarily making ground among men, urbanites and older voters. The party was previously losing voters to the Social Democrats but this trend appears to have been reversed.

The dramatic falls for Mona Sahlin’s Social Democrats during the autumn appeared to have slowed down however. The party claimed the support of 37.8 percent of voters in the December poll, up from 37.2 percent in November – its lowest level since the 2006 election. Together with the Left party and the Green party support for the opposition totalled 52.3 percent, in comparison to 44.1 percent for the Alliance parties.

The Green party retained is position as Sweden’s third largest party with 7.2 percent of the vote.

Confidence in prime minister Fredrik Reinfeldt continues to grow, a poll from Sifo and published by Aftonbladet, shows. 54 percent of voters state that they have high or very high confidence in the prime minister, a climb of 5 percent in comparison with a spring survey. Confidence in opposition lead Mona Sahlin has however declined, down 6 percent to 36 percent.