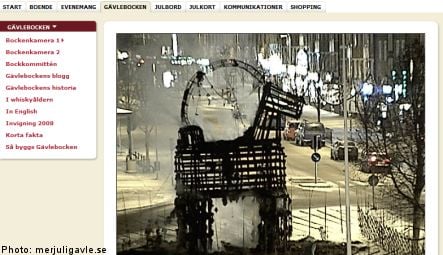 Images from a webcam posted near the world-famous Gävle goat showed a blackened skeleton and clouds of dark smoke were all that remained of the once towering straw goat.

For decades, the town in eastern Sweden has erected a traditional straw goat shortly before Christmas in the main city square.

And for decades, vandals have tried to burn down the goat to the ground.

A spokesperson for the Gävle goat committee was distressed upon hearing the news.

“We have been so happy that he survived through Christmas Eve, which is the toughest period every year. We haven’t applied any flame retardant the last two years and thought that he would probably survive without it,” said the committee’s Anna Östman to the TT news agency.

“The goat adds a great deal to the Christmas atmosphere in Gävle.”

Östman added that the goat’s fate is watched around the world, prompting what can often be emotional responses from afar regarding the burning of the goat.

“So far this year, people from 105 countries have followed the goat via the webcams. And many become really sad when they learn that he’s burned down,” she said.

Although police were near the scene when the goat first started to burn, no arrests had been made in the case as of 4.30 am on Saturday.

The 13 metre high straw goat was completed on November 28th and survived nearly a month before succumbing to the flames.

Gävle’s Christmas goat generated many imitators across the country, a number of which didn’t last as long before going up in smoke.