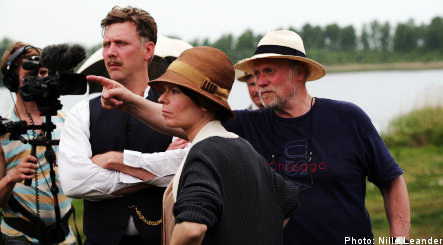 A jury of 31 members of the Swedish Film Institute has convened to vote in a secret ballot for the the 2008 Guldbagge Awards (“Golden Beetle”), Sweden’s national film awards, and the results were published on Tuesday.

“Let the Right One In”, “Everlasting Moments” and “Involuntary” dominated the nominations to little surprise from critics. The trio of films are nominated in all of the main categories of Best Film, Best Cinematography, Best Screenplay and Best Director.

Jan Troell’s film “Everlasting Moments” has been submitted as Sweden’s official entry to the Oscars and has therefore gained significant international prominence. The film, starring Maria Heiskanen and Mikael Persbrandt in the leading roles, has been nominated for a total of eight Guldbagge awards.

Tomas Alfredsson’s vampire drama “Let the Right One In” has also been warmly received by critics at home and abroad. The film takes a social realistic look at the vampire genre, something of a trend within film in 2008.

The film has already won several awards at international film festivals and is the mainstream media’s favourite to bring home the main awards.

“Involuntary” directed by Ruben Östlund recently claimed the title of Best Director of a Foreign Language Film at the Geneva film festival to add to a slew of other nominations and international prizes.

The film is a tragi-comedy about the inexorable influence of the group over the individual and stars Cecilia Milocco, who has been nominated for the award of Best Actress in a Leading Role.

Lena Endre for her for her role as Susanna in “Heaven’s Heart” completes the nominations for the category of best leading actress.

Peter Stormare for his role as Klemens in Wolf, and Gustaf Skarsgård for his role in Patrik Age 1.5, will compete against hot favourite Mikael Persbrandt for the award of Best Actor in a Leading Role.

“Lust, Caution” by Ang Lee, “No Country for Old Men” by Joel Coen and “There Will Be Blood” by Paul Thomas Anderson are the Swedish Film Institute’s nominations for Best Foreign Language Film.

The Guldbagge Awards ceremony will be held January 12th 2009 at Cirkus in Stockholm. Swedish Television (SVT) will be broadcasting the event live.

Awarded annually since 1964, the Guldbagge is the name of the Swedish Film Institute’s award for achievements during the previous year. The award itself, in the form of a fantastical beetle, was designed by the artist Karl Axel Pehrson.