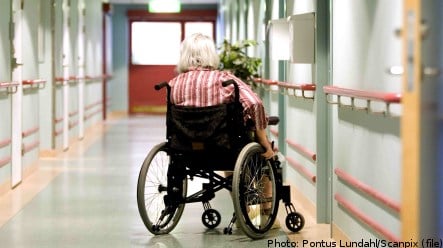 A working group within the party, led by the Minister for Elderly Care and Public Health Maria Larsson, are currently working intensively with a report into elderly care to be presented shortly.

“There is a need for a fast lane and guidance for care. This concerns a group whose needs can change fast, from day to day,” Larsson said to Dagens Nyheter (DN).

“They should also receive a VIP card.”

There are an estimated 350,000 elderly patients in Sweden who could draw benefit from the scheme which has a proposed budget of 1 billion kronor ($130 million) over three years.

The VIP care would include a special hospital entrance for elderly patients who could thereby avoid long waits at accident and emergency departments, and a nationwide helpline to meet the specific needs of elderly patients.

Maria Larsson argues that all of Sweden’s councils should establish support schemes and that legislation would undoubtedly be required to establish the new care regime.

The Christian Democrat group also propose the development of a national strategy to expand gerontological expertise on the diseases afflicting the elderly, a group which is broadly recognized to suffer from inferior care in Sweden, writes DN.