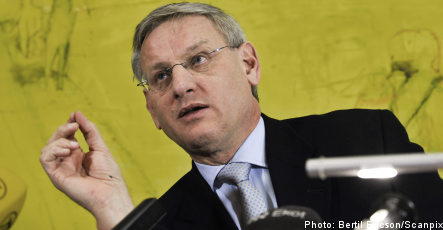 “You cannot stop the (weapon) smuggling without ending the isolation policy,” Bildt, who visited the Middle East this week as part of a European Union effort to negotiate an end to the violence, told reporters in Stockholm.

Israel’s policy of isolating the Gaza Strip “is in itself not morally defensible, but it is also not politically possible to stop the smuggling (of weapons into the area) because of the extremely strong incitement to smuggle that is baked into the isolation policy,” he said.

The lack of freedom of movement and the shortage of goods were at least partly to blame for the hundreds of tunnels that have been dug from Gaza to Egypt, Bildt said.

“This has of course made it easier to smuggle in weapons and explosives…which have made it easier for Hamas to build up its military capacity and direct it at Israel in the unacceptable and destructive way we have witnessed in recent weeks,” he said.

“The lesson to be learned is that if you isolate a group of people, they will try to dig their way out.”

Bildt, whose country is set to take over the rotating EU presidency in the second half of this year, stressed the importance of bringing an immediate end to the conflict that since December 27th has killed more than 700 Palestinians.

“For every bomb that falls, for every rocket that is shot, for every child that dies, hatred, opposition and tensions are created that we will later have to deal with,” he said.