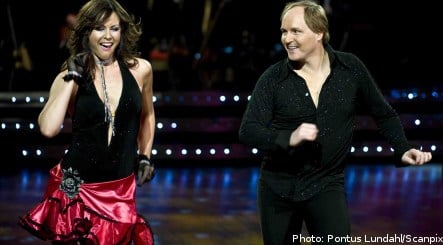 Alling, an actor that made his breakthrough in 1993 and whose recent work includes appearances in Arn – The Knight Templar and television series Hjälp!, dazzled the studio audience with his quick feet and snaking hips in performing a cha cha cha to Jill Johnson’s “Crazy in Love”.

“It went better than expected. I’m shocked to be honest,” Alling told TV4.

“We have a little to live up to next week.”

Much of the pre-premier attention had been centred on the participation of popular blogger Isabella “Blondinbella” Löwengrip who paired up with Jonathan Näslund for a cha cha cha to Modjo’s “Lady (hear me tonight).”

The jury, chaired by British choreographer Tony Irving, was scathing in its criticism of Isabella’s performance calling her “like Bambi on thin ice”. She firmly rejected the epithet explaining instead that she was “the flirty girl” and was confident that the couple’s “enthusiasm” and “charm” would be enough to claim the people’s vote.

But despite Isabella’s lukewarm reception from the jury, the harshest verdict was reserved for radio presenter Kitty Jutbring, who danced with Anders Jacobsson to “Mercy” by Duffy. Kitty’s fruit bowl dress did little to deflect criticism and she came second to last in the jury’s grading.

“They were very harsh. It is just a question of letting them do their job and I try to do my bit as well as I can. Perhaps it’ll work better next week.” Kitty said.

Kitty complained earlier in the week that she was not being allowed to join the “Battle of the Blondes” between Isabella, Idol jury member Laila Bagge and former glamour model Magdalena Graaf, whom she reasonably pointed out was not even blonde.

“She is ash-blonde,” Kitty underlined to TV4.

“I am not being allowed to be part of this blonde battle. Am I not blonde?”, she asked.

The trio of “blondes” were the bookies favourites before the competition began and Magdalena and Laila proved that they at least, were worthy of the odds.

Magdalena and her partner Daniel da Silva claimed second spot in the jury’s votes while Laila and Tobias Wallin came in third.

No couple was excluded after the first heat and votes, from both the jury and the television audience, will be added to next week’s round, the second of 12.

As Let’s Dance moves on it is clear that there is more than one qualification for taking the dance floor by storm, and the bookies may have to re-think their odds. Strawberry-blonde maestro Morgan Alling proved that it’s the feet, that in the end, do the talking.

Let’s Dance is one of Sweden’s most popular television shows and will air on TV4 at 8pm on Friday for the next 11 weeks.

Who are this season’s contestants and dancers? See photo gallery