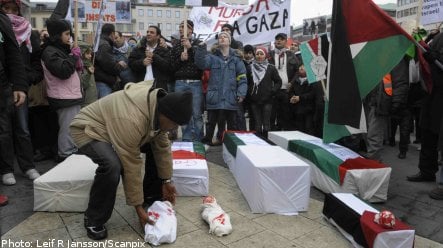 Sergel’s square in the centre of the Swedish capital was packed with demonstrators carrying banners and chanting in condemnation of the Israeli attacks on Gaza which entered their third week on Saturday.

A sea of Palestinian flags were carried by demonstrators in the march which will culminate at the Israeli embassy on Torstenssonsgatan in central Stockholm.

Among the chants from demonstrators included the call: “What shall we do? Stop the massacre!”

Demonstrators carried with them coffins as a memorial to the more than 800 Palestinians killed since the conflict began on December 27th.

Among the speakers at the square were former Green party leader Per Gahrton, now chairperson of the Palestine Group in Sweden.

He called on Sweden and the EU to “put a stop to Israel’s occupation and politics of violence.”

According to the BBC, Israel continued to pound Gaza with air strikes on Friday night and has so far refused to heed calls for a ceasefire from the UN.

Hamas in return fired rockets at Israeli towns on Saturday morning after launching some 30 missiles from inside Gaza over the course of Friday.

The UN resumed its work to distribute aid to besieged Gazans on Saturday after suspending operations on Thursday when a driver was killed.

Further demonstrations were held in other cities across Sweden on Saturday.