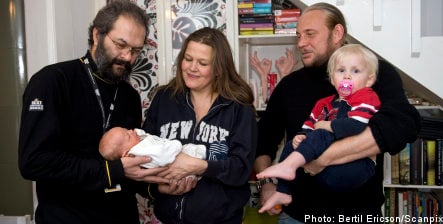 In the early hours of Tuesday morning, Annika Johansson woke up her husband Christer Domeij and told him their new baby was close to making its entrance into the world.

After a quick chat with staff at Danderyd Hospital’s delivery room, the couple woke their two-year-old son Rex and called a taxi to collect them at their home in Stockholm city centre.

With the taxi on its way, Johansson became increasing aware of the seriousness of the situation.

“My contractions had started but I don’t think Christer understood how close it was.”

When the taxi arrived, Christer sat in the passenger seat with Rex, while Annika headed for the back seat.

“I thought: it can’t happen like this. And I mainly thought about how I didn’t want to soil the taxi,” she said.

A few minutes later, there was a new baby boy on the back seat.

“I wasn’t able to resist, it just came out,” said Johansson.

Cab driver Ali Hossinian explained that he realized the baby was born when he hear a distinct ‘plop’ from the back seat.

“‘Pick up the baby so it doesn’t suffocate’, I screamed at the lady,” he said.

By now the car was flying along at 140 kilometres per hour and Hossinian was controlling the wheel with his knees. With one hand, he helped Johansson to sit up, while holding his phone with the other hand and speaking to the taxi company’s switchboard.

Daddy Christer was strugling to comprehend understand what had just happened.

When they got to the hospital, Johansson was told that she given birth to a healthy baby boy who weighed 3.3 kilos. She was still thinking of the journey in the car (bil in Swedish) when considering a name for the new arrival.

“Bill, maybe. And then maybe a middle name that will serve as a reminder of this fantastic birth,” said Johansson.