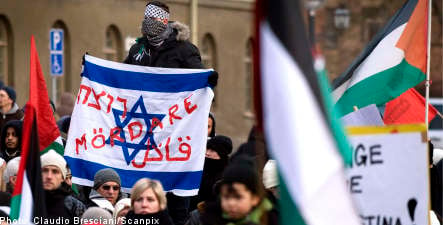 Though geographically, mentally and culturally very distant from the Palestinian territories and Israel, Sweden somehow manages to maintain an intense interest in what goes on in the conflict-ridden Middle East.

The sheer volume of demonstrations across Sweden and opinions expressed in the media regarding the recent attacks by the Israeli army in Gaza is truly astonishing; a complex phenomenon which deserves to be thoroughly researched.

A week after a huge anti-war demonstration at Humlegården in Stockholm on Saturday January 10th, with 8,000-12,000 participants, a smaller one took place at the same venue.

Though not as well-attended, to me it seemed like quite a success; I could never have imagined that the situation in Gaza would garner so much interest here in Stockholm. The speakers and the crowd called on Israel to stop its attacks on Gaza, declared it a non-democratic state, chanted in favour of boycotting it completely and showed its support for the Palestinian people.

Though all done in a peaceful and calm, yet effective and powerful, manner, there were a few matters that made my insides twist.

It is very tempting to compare what goes on in Israel and Palestine to other brutal regimes in history, such as the apartheid period in South Africa or the more extreme comparison to Nazi Germany. However, the situation in Israel is unique and different from both of those – while a boycott might have been a useful tool in ending apartheid, if people actually understood how different both cases are then they might realize that this is an empty chant for a useless “solution”.

A more superficial yet disturbing issue concerns various signs and placards comparing Israel to Nazi Germany – a disgusting provocation which, if anything, only leads to more hate and misunderstanding. I hardly want to mention the “communists” (if wearing an Adidas jacket with CCCP sewn onto it makes you a communist…) with flags celebrating violence in a ridiculous, pastiche manner, but they were also there, making some noise.

While clearly full of compassionate solidarity, it seems that a lot of protesters lack an in-depth understanding of the complexity of the situation. Maybe the protests ease the consciences of some of the participants and offer them a way to ventilate their feelings. But they do not offer a true spirit of change or present a real challenge to the many mechanisms which allow the Israeli occupation to continue.

A day after the anti-war march, which was also to some extent an anti-Israel protest, a show of solidarity and support for Israel was scheduled at the Great Synagogue of Stockholm. Though in the same city, and just about 500 metres away from where the anti-war demonstration took place, this was a different world.

A small crowd of about 250 people, most of whom knew each other, gathered in the beautiful synagogue to listen to various key figures in the Jewish and Israeli community. The demonstration was a show of support for the people living in the southern regions of Israel, who have been the target of rockets from Hamas (and other terrorist groups) for over seven years, and for the Israeli soldiers in Gaza.

Unfortunately, much like the anti-war demonstration, this turned from a humanistic support rally into a gathering with strong national-political overtones, especially when the Israeli ambassador Benny Dagan tried to convince the crowd (which didn’t need much convincing) that Israel’s attacks were “a diplomatic effort” – if it wasn’t a disgustingly tragic statement, it could have been hilarious.

Being a Jewish-Israeli who has moved (temporarily) to Sweden, I am often approached as a representative of the state of Israel. I am far from being that: I am often ashamed of the crimes committed by the Israeli army and Israeli politicians, crimes that do not help any cause but the vague interests of the politicians themselves.

However, this does not mean that I see Israel as the side solely responsible for the many suffering civilians (both Palestinian and Israeli). The politicians in the Palestinian territories are at least as responsible – I wonder how many of the supporters at Saturday’s demonstration actually know the history, causes and doctrine of Hamas?

It might be a bit naive to expect Israelis to make some humanistic distinctions in the current situation, understanding that a human is a human, pain is pain, death is death and suffering is suffering, just as it might naive to expect the Palestinians to re-consider their strategy for reaching the goal of their own state.

But how come people who live in Sweden can’t take a deep breath, sit down, read, listen and think things through?

This desire to pick a side automatically and show support through clichés and stereotypes seems odd, to say the least, when it comes from people who are in a position to understand the complexity of the situation.