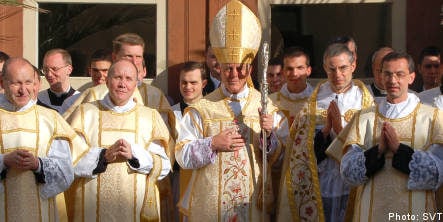 The move comes on the heels of a report by Sveriges Television (SVT) investigative news programme Uppdrag Granskning which revealed that the Society of St. Pius X (SSPX), an ultra-conservative breakaway faction of the Catholic Church, had been holding meetings in Swedish churches.

In the programme, SSPX bishop Richard Williamson openly denied the Holocaust, adding that he did not believe Hitler purposefully gassed Jews to death or that any gas chambers existed.

“It’s obvious that this is an extreme right-wing group. They deny the Holocaust, are extremely negative toward homosexuals, and express a number of racist attitudes,” Martin Lind, a bishop with the Swedish Church diocese in Linköping in central Sweden, told the TT news agency.

According to the report, SSPX held meetings in Swedish churches on 15 separate occasions, something that Lind vowed wouldn’t happen again.

“If a church has a bishop who speaks in way as degrading as appeared in the programme, that’s enough for me to suspend all organizational cooperation,” he said.

The programme also told the story of Sten Sandmark, a former Church of Sweden vicar who left his 30-year-career with the church after church leadership decided that same-sex couples could receive blessings in churches.

He now says his new mission is to work with SSPX supporters in Sweden in a bid to convert Sweden back to Catholicism.

SSPX was founded in 1970 by French Archbishop Marcel Lefebvre, but lost its legitimacy in the eyes of the Vatican in 1975.

It continues to operate, however, and claims to have 486 active priests in 63 countries and more than one million followers around the world.

Sandmark is currently undergoing an accelerated training course in Germany to become an SSPX priest so he can begin working for the society in Sweden as soon as possible.

When asked by the SVT what he and his followers are fighting for, Sandmark responded:

“That Sweden shall once again become Catholic.”

But an investigation of Swedish SSPX members by SVT revealed that several have ties to some of Sweden’s most well known right wing and nationalist extremist groups, including the National Democrats (Nationaldemokraterna), the 30-novemberrörelsen (‘November 30th movement’) and the Nysvenska Rörelsen (‘New Sweden movement’).

In addition, the founder of SSPX in Sweden, Jonas de Geer, is also a well-known figure from Sweden’s extreme right who has served as a spokesperson for the National Democrats and who recently spoke at the Nordic Festival (Nordiska festivalen), one of Sweden’s largest neo-Nazi gatherings.

Sandmark freely admits that many SSPX members in Sweden could be considered right-wing extremists, but emphasizes the group isn’t about politics and there isn’t much he could do to prevent people from holding certain political views.

“Everyone is welcome. But not to discuss politics,” he told SVT.

“I can’t prohibit anyone. We can’t do that in Sweden.”

According to Sandmark, SSPX likely attracts more right-wing than left-wing extremists because the former “hold more traditional views” and are more “conservative”.

He’s also confident about what lies ahead for him and the SSPX in Sweden.

“The future looks bright, that’s what I believe” he said.

“But it won’t be free of difficulties.”