Figures compiled by the Swedish Unemployment Insurance Board (IAF) show that the last three months of the year marked the first time since 2006 to show an increase in the number of participants in the programmes.

The number of people enrolled in unemployment insurance programmes began dropping at the end of 2006, with enrollment continuing to slide through 2008.

The group added, however, that not all programmes had seen a reversal in the negative membership trend.

Nine programmes showed membership growth at the end of 2008, with the programme associated with Unionen, a white-collar trade union, posting the greatest influx of members.

But several other unemployment insurance programmes, including those catering to workers in the restaurant and hotel industry, musicians, the theatre business, and the fishing industry all reported a 3 percent drop in membership during the fourth quarter. 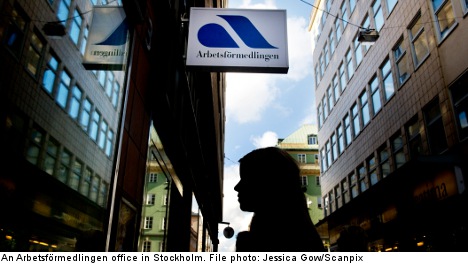 Swedish economic growth is looking flat for 2013 and many Swedish companies have already signaled they are looking at cutting staff this year.

And while no one ever thinks they’re going to lose their job, it never hurts to make sure you’re prepared should a dreaded redundancy notice come your way.

They’ve been around in Sweden in one form or another since the mid-1800s, when a machinists union tried to launch a scheme for its members.

The effort soon fizzled, however, and after a few more fits and starts, unemployment insurance was written into Swedish law in 1935.

Today, around 3.4 million workers in Sweden are enrolled in an unemployment insurance fund, according to figures from the Swedish Unemployment Insurance Board (IAF).

But figuring out exactly how everything works isn’t always straightforward. Below are a few pointers to bear in mind as you go about signing up.

Being a full member of an unemployment insurance fund entitles workers to receive up to 80 percent of their former salaries for the first 200 working days after losing their jobs.

The following 100 days are paid at 70 percent of previous income. However, payments are capped at 680 kronor ($104) per day, so high earners shouldn’t expect to receive 80 percent of their previous salaries.

But in order to receive the maximum payout, you need to have been a member of an unemployment insurance fund for at least 12 months prior to applying for benefits. While you can still get some money, how close you come to the maximum will depend on how much you’ve worked, with the insurance plan making the final call.

And even if you lose your job before you’ve managed to sign up for an unemployment insurance scheme, you can still qualify for benefits, but only at a basic level of no more than 320 kronor per working day.

2) Not all unemployment insurance funds are the same

There are currently 29 different unemployment insurance funds, and while they all offer the same basic income protection insurance, there are significant differences from one plan to the next.

You don’t have to be a member of a union to join the plans, but some schemes offer discounts to union members.

In addition, the monthly membership dues vary substantially from one plan to the next.

Being a member of the Financial and Insurance Employees’ Unemployment Insurance Fund (Finans- och försäkringsbranschens arbetslöshetskassa) will only set you back 85 kronor a month, while the monthly fee for the fund for hotel and restaurant workers (Hotell- och restauranganställdas a-kassa) stands at a hefty 390 kronor.

Fees can also vary depending on whether or not you are employed when you join.

There are also a couple of schemes that cater for a wider range of people.

The AEA (Akademikernas Erkända Arbetslöshetskassa), for example, is open to anyone with a bachelors degree (180 points gained through academic study in the European Credit Transfer System or 120 points in the old Swedish system).

Alfakassan, on the other hand, is open to anyone, regardless of their job or academic qualifications.

Even if you’ve been a member of a fund for more than a year, processing benefits claims can take time, so it’s a good idea to have a little bit of money saved up to help cover costs while your application is being reviewed.

According to Katarina Mattsson with the Swedish Federation of Unemployment Insurance Funds (A-kassornas Samorganisation, SO), it takes a minimum of four weeks for benefits claims to be processed.

“But processing times can vary depending on the existing unemployment rate and how many claims have been filed,” she explains.

In the first half of 2012, the average processing time was six weeks, according to figures from IAF. But some unemployment insurance funds needed a full 10 weeks to process an applicant’s claim.

It’s also important to remember you need to file your benefits claim within nine months of losing your job, otherwise the funds can reject your application, provided there aren’t extenuating circumstances, such as illness or injury, that prevented you from filing sooner.

Whatever unemployment insurance plan you join, the benefits you receive aren’t means-tested. So, regardless of whether you have 10,000 kronor in the bank or 10 million, you will still be entitled to payments if you lose your job.

5) You can’t just sit around and collect benefits

While your personal wealth may not affect your payouts, you need to meet other conditions in order to receive benefits.

First, you must be registered with Sweden’s national employment agency (Arbetsförmedlingen), which plays a key role in ensuring you qualify for benefits.

“The jobs agency doesn’t decide whether or not you receive benefits, but they can inform the unemployment insurance fund about whether or not they think you qualify,” says Mattsson.

Among other things, you need to be physically able to work at least three hours a day and 17 hours a week. You also must actively seek and be ready to take any suitable job.

6) Running your own company can affect the benefits you receive

Small business owners and those who are self-employed can also claim benefits if their businesses go bust.

In fact, there is an unemployment insurance plan especially designed for small business owners, the Unemployment Insurance Fund for Entrepreneurs (Småföretagarnas arbetslöshetskassa, SmåA).

The fund is open to entrepreneurs, as well as their spouses and other family members if they are paid employees working within small and medium-sized family-owned businesses in Sweden.

People who run or own a company must shut down the company, or at least suspend all activity, in order to qualify for benefits. Using the unemployment schemes to cover a downturn in business is not allowed, meaning many people who run small companies opt to remain outside the schemes altogether.

“It is possible for self-employed people to get benefits, but determining the level of benefits can be a bit complicated,” says Mattsson.

“There are a number of rules about determining when an operation is no longer profitable and about how much someone worked.”

She adds, however, that the same benefit range applies to the self-employed that applies to salaried workers but that it’s best to check with the fund for answers to specific questions.

7) It’s possible to change from one plan to another

Let’s say you join an unemployment insurance scheme when you take a job in construction, but two years later move to the hospitality industry. What happens then?

“A fund would never force you to leave, but it’s better if you change to one that is related to your industry,” advises Mattsson.

“They will have a better understanding of your industry, including relevant collective wage agreements, and be in a better position to deal with your specific needs.”

SEE ALSO: Ten words that you didn’t know came from the Vikings

So if you’re having second thoughts about whether you joined the right fund, the decision isn’t final.

Also worth bearing in mind is that unemployment insurance payments are taxed like any other income. Additionally, you will still have to pay the monthly fees while out of work, although you will be given a discount.

Do you have a question related to employment in Sweden? Send an email with your question to [email protected] with “JobTalk Sweden” in the subject line.