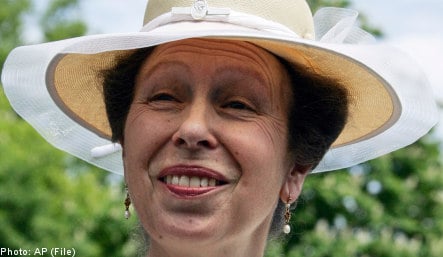 Prosecutors are now considering issuing an international arrest warrant in order to bring Sjölander, who worked as a chef for Princess Anne, the only daughter of Queen Elizabeth, to justice.

His conviction on charges of affray, common assault and threatening behaviour, stems from an incident from October 2008 in which the drunken Swede threatened 28-year-old horse groom Amy Tyrrell while both were working in the stable.

“Steffan was working on something there and he was loud and aggressive and rude as he always was,” Tyrell told the court.

According to Tyrell, Sjölander then began advancing toward her with a pair of metal pincers usually used to extract nails from horseshoes.

“He was telling me he was going to ‘remove my fucking nipples’ in his horrible manner,” she said.

Tyrell’s account was bolstered by testimony from Rachel Allardyce, a groom to Zara Phillips, the daughter of the Princess, who also heard Sjölander’s threats.

“He was walking towards Amy, laughing in a sinister manner, saying, ‘I cut your fucking nipples off’. He was pointing the pincers towards her body and nipples,” said Allardyce.

Later that same day, Sjölander continued to harass the stable hand after insisting that Tyrrell give him a ride in her car from the stables up to Princess Anne’s residence.

“On the way he grabbed my left arm with both his hands… and told me he was going to kill me. I stopped the car, told him not to threaten me or he would be walking. Then he shut up,” Tyrell explained.

But the Swede’s terrorization of Tyrell didn’t end there.

A short time later, an ever more inebriated and aggressive Sjölander begged the woman to mend his finger after he cut it in the kitchen.

Relenting to her injured colleague’s request, Tyrell said she turned around after bandaging the chef’s finger to find a pair of scissors thrust in her face.

“I can’t remember what he said because I was so horrified,” she said.

According to the Daily Mail, Tyrell told the court that Sjölander was a habitual drunk who was “always aggressive – an angry, angry man” when he drank.

“He used to buy bottles and bottles of vodka and the Princess doesn’t drink so it definitely wasn’t her,” said Tyrell.

The case had been adjourned until last week, however, at which time the magistrates convicted Sjölander in his absence on all three charges against him.