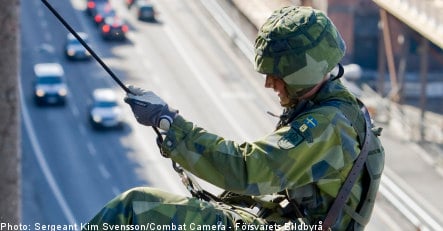 Advance word about the massive cuts comes from a report in the Svenska Dagbladet (SvD) newspaper, citing sources within military headquarters.

A government directive to the Supreme Commander from November confirms that the military budget will be frozen at 38.9 billion kronor ($4.9 billion) per year through 2014.

But at the same time must every unit within the military’s operational forces be able to deploy more rapidly.

On Friday, the Supreme Commander will respond that the new requirements will mean dissolving operational units and a reduction in vital weapons systems, say several military headquarters sources to SvD.

The army will be hit the hardest.

“There will be a 30 percent reduction of ground forces units,” once source told the newspaper.

The number of soldiers and officers deployable for combat will be cut to 12,500, down from the current level of 20,000.

According to SvD, the cuts mean that the army will retain seven tactical battalions and that one battalion will be take from the amphibious corps and instead counted in ground combat forces.

In total, Sweden’s army will be left with eight battalions.

The military is also expected to shed half of its battle tanks. The government has said that tank battle groups should consist of lighter units which can easily be transported. In other words, according to SvD, the request means reducing the number of tanks.