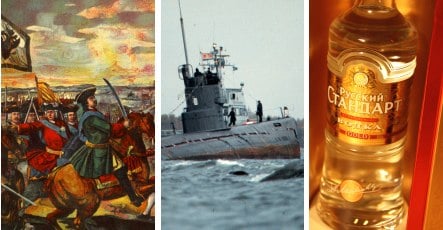 Any cursory glance at Swedish history reveals that Russia has continuously affected Swedish politics and society – from centuries of war to a shared passion for vodka.

And even though there hasn’t been a war between the two countries for 200 years, the complicated legacy of Sweden’s relationship with that lumbering bear to the east continues to affect contemporary attitudes towards Sweden’s Russian community.

Most accounts of relations between the Swedes and Russians start with Rurik, a Viking leader who supposedly united a number of Slavic tribes in western Russia sometime in the 9th century to form an early precursor to the modern Russian state.

Another popular but disputed theory even holds that the word “Russia” itself derives from ‘Rhos’ or ‘Rus’, the name by which the Viking transplants were known at the time, and which refers to Roslagen, a region along Sweden’s central east cost.

“Russians have a very positive image of Sweden,” says Lioudmila Siegel, referencing Sweden’s connection to the founding of Russia.

Siegel came to Stockholm from St. Petersburg about a decade ago because of a relationship with a German man who lived in Sweden.

Today she heads the Ryska riksförbundet i Sverige (‘Union of Russian Associations in Sweden’), an umbrella organization of 24 associations with around 1,000 members.

The group’s website, rurik.se, pays homage to the main character in the founding of Swedish-Russian relations.

In addition to the Russian Orthodox Church, which has parishes in five cities around the country, the Ryska riksförbundet serves as an important node for Sweden’s sizeable Russian community as well as a way for them to stay connected with their homeland.

“To integrate you need to be able to hold on to your identity, and groups that help you keep a connection to your homeland make it easier to do so,” says Siegel.

Today, there are about 16,000 Russians citizens in Sweden, according to figures from the Russian Embassy.

Unlike some other immigrant communities, Russians in Sweden don’t have any central enclave or city featuring a predominantly Russian-speaking district.

“Russians live everywhere in Sweden,” says Russian embassy press and cultural attaché Anatoly Kargapolov, adding that most Russians live in the Stockholm region, while about 2,000 live in the south west around Gothenburg.

However, the embassy estimates that the Russian-speaking community as a whole is much larger – nearly 90,000 people altogether, including immigrants from the other former Soviet republics, as well as Russian-speaking Swedes.

The roots of most of Sweden’s current Russian community can be traced to three of the defining moments in 20th century Russian history: the 1917 revolution, World War II, and the collapse of the Soviet Union.

“A lot of people passed through Sweden on their way to other places, but some decided to stay.”

Later, during the Second World War, tens of thousands of captured Russian soldiers were transported by the Nazis from battle grounds on the eastern front to prison camps in occupied Norway.

Thousands ended up escaping from the camps, managing to cross the border into then-neutral Sweden.

More than 2,000 Soviet soldiers were housed in four refugee camps near Skinnskatteberg, 60 kilometres northwest of Västerås in central Sweden.

During their time in Sweden, the soldiers helped build an isolated stretch of gravel road not far from the camps.

They marked the site by etching “USSR 1944”, along with a hammer and sickle enclosed in a star, in a small stone, commonly referred to today as the Rysstenen (‘Russian Stone’).

Following the war, most of the escaped war prisoners returned to Russia or other parts of the Soviet Union, but “a few hundred” ended up making their homes in Sweden, according to Kargapolov.

On May 9th, when Russians celebrate victory in World War II, representatives from the Russian community, as well as officials from the embassy make a trip Skinnskatteberg to pay homage to the work done by the Russian war refugees

More recently, another wave of Russian-speaking immigrants made their way to Sweden following the collapse of the Soviet Union in the early 1990s. In addition to Russians, a number of former residents of the Baltic states and Ukraine also come in Sweden to start again.

As it turned out, the post-Soviet wave of Russian immigrants included a high percentage of women. According to a 2005 report by Statistics Sweden, women comprise more than 66 percent of Russians living in Sweden.

“Most of the Russians living in Sweden are wives of Swedish men,” Siegel confirms.

Russian women are also the most highly educated immigrants in Sweden, with nearly 60 percent having completed at least three years of higher education.

Siegel went on to explain, however, that Russians in Sweden today continue to battle a Swedish mindset that Russia and its people are to be feared.

“Swedes are still scared of Russia,” she says.

The origins of Swedes’ fear and distrust of the “Russian Bear” is rooted in part in the two countries’ history of war with one another.

“You have to remember that, for 600 years, Sweden was involved in wars with Russia and lost many of them,” explains Sven Hirdman, who served as Sweden’s ambassador in Moscow from 1994 to 2004.

In particular, Hirdman cites Russian naval attacks against Sweden’s eastern coast in 1720-21 as adding to Swedish fears about the perils brought by an aggressive Russia.

It is perhaps those attacks which eventually motivated parents in Sweden to employ “ryss-skräck” (‘Russian dread’) to help get their children to bed at night.

“Parents in Sweden used to tell their children that, if they didn’t get into bed, the Russians would come and take them away,” the embassy’s Kargapolov explains.

The attacks came in the final years of the Great Northern War, perhaps the longest and costliest war between the two countries, which included the famous Battle of Poltava, where Russia defeated Sweden in 1709, marking the start of Sweden’s decline as a great European power and the rise of imperial Russia.

“In Russia, the Battle of Poltava was important, but it’s not something we go out of our way to celebrate,” says Kargapolov.

He understands, however, why the battle remains fresh in the minds of many in Sweden 300 years after the fact.

Nevertheless, he wishes that Swedes could instead focus on the 200 years of peace which have followed the conclusion of the Finnish War of 1809.

But even that peace came with a bitter pill for Sweden, which was forced to give up Finland, a territory it had claimed as its own for 650 years.

“During the cold war there was a real risk of another major war breaking out in Europe,” he says.

“Not that the Russians had anything in particular against Sweden, but it’s quite likely that Sweden would have been dragged into any such conflict.”

And many Swedes still have questions about how Russia treated Raoul Wallenberg, the Swedish diplomat who helped hide thousands of Jews in Budapest from the Nazis before being captured by the Soviet army when it took control of the city in 1945.

Wallenberg was never heard from again and the circumstances of his death, which reportedly happened in 1947, have never been fully resolved, despite inquiries by both Russia and Sweden.

Swedish concerns about Russia were fuelled again in 1981 following the “Whiskey on the rocks” incident in which a Soviet Whiskey-class submarine ran aground in Sweden’s southern coast, just 10 kilometres from the Karlskrona naval base.

Russia’s actions in the Caucuses in the autumn of 2008 were yet another reminder to Sweden that Russian isn’t afraid to use force, even if Sweden isn’t in the crosshairs.

“That image of an aggressive Russia still exists,” says Hirdman

He feels the threat to Sweden is exaggerated, however, often employed in the current defence policy debates by those arguing for a stronger Swedish military.

“To make their case, they often conjure up the scary Russian Bear as a way to drive the discussion.”

Siegel regrets that the past continues to trump the present when it comes to Swedes’ perceptions of Russia, adding that many Russians in Sweden go as far as changing their names to avoid work place discrimination by potential employers.

“We are more alike than different, after all,” she says.

And while Russians may be able to cope with latent “ryss-skräck”, they must also put up with more recent stereotypes, including that of the diamond-flaunting Russian gangster or the desperate Russian prostitute.

“So many things are in Swedes’ heads that don’t exist in reality, but that’s something we’re working to change,” says Siegel.

And while Kargapolov admits there was an influx of nouveau riche Russian tourists in the 1990s, the Russians who come to Stockholm today are a bit less gaudy.

“There are not as many fur coats these days,” he says with a smile.

Moreover, as trade and business relations between Russia and Sweden continue to develop, a new generation of Russian immigrants is starting to emerge.

“We are seeing more young Russians coming here who are working for companies doing business with Russia,” says Kargapolov.

There is also a steady current of cultural exchange between the two countries, with Sweden’s Russian community also making an effort to hold more events celebrating Russian history and culture.

At the end of February, the Ryska riksförbundet is organizing a festival at Medborgarplatsen on Södermalm in Stockholm to celebrate Maslenitsa, a Russian folk holiday preceding Russian Lent.

“These events aren’t only for Russians,” explains Siegel, adding that she hopes the gathering and others like it will encourage Swedes to dance with the Russian bear, rather than simply running from it.