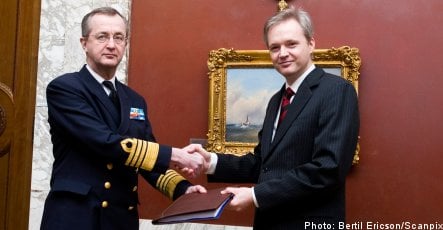 The report, given by Supreme Commander Håkan Syrén to Defence Minister Sten Tolgförs, presents the military’s suggestions for changes to Sweden’s operational force structure to be completed by 2014.

“Today’s response from the Supreme Commander represents a powerful increase in Sweden’s defence capabilities when it comes to operability and readiness,” Tolgförs said in a statement.

The new plan calls for a reduction in the number of tank units in an attempt to concentrate the military’s resources in fewer places. Today, Sweden’s tank units are stationed in Skövde in central Sweden and in Revinge in Skåne in the south.

When it comes to marine units, the basing options will be maintained for priority areas such as the Baltic island of Gotland, Öresund in the northwest, as well as the straits of Kattegatt and Skagerrak separating Sweden from Denmark.

The military will also abandon one of its airbases by 2010 at the latest. Other parts of the affected garrisons will be preserved, while command centres and air defences will be moved to another place, writes the Supreme Commander.

Currently, Sweden’s military air wings are stationed in Kallinge in Blekinge in the south, in Såtenäs in central Sweden, and in Luleå in the north. There is also a helicopter fleet in Linköping in east central Sweden, as well as a flight training school in Uppsala north of Stockholm.

According to Syrén, Sweden’s capacity for defending its own territory needs to be improved. He says that units and equipment dedicated to surveillance and the collection of intelligence will be maintained and developed.

Another conclusion by Syrén is that Sweden ought to increase its number of ships and that older patrol boats be replaced with more modern ships.

After 2010, soldiers’ basic training, and the main parts of the unit assigned to maintain air bases, will be centralized in one place.

The reduction in operational forces will also result in the need for only four training platforms, rather than the current total of five.

The military’s proposal comes in response to the government’s request for advice from the Armed Forces about how the Swedish military will evolve between 2010 and 2014.

The Supreme Commander’s suggestions will provide the basis for a bill on the future direction of the military which Tolgförs is expected to present to the Riksdag in March.